By Shin Hyon-hee
Published : Jun 29, 2017 - 15:57       Updated : Jun 29, 2017 - 17:59
With North Korea topping the agenda for the first summit between Presidents Moon Jae-in and Donald Trump, the focal point is whether the two leaders would manage to settle on a joint approach to dismantle the communist state’s nuclear program.

En route to Washington, Moon proposed a step-by-step formula starting with a halt in the North’s nuclear and missile tests and progressing to a complete disarmament and ultimately the establishment of a peace regime. The moratorium must entail “thorough verification work” including facility inspection, and “some kind of rewards” from South Korea and the US, he said.

“A freeze of the nuclear program should be the entrance to dialogue, and its complete elimination and the creation of a peace regime on the peninsula is the exit,” he said at an in-flight news conference Thursday.

“If the freeze is the entrance to dialogue for the disarmament, we need to trade the steps in between under the ‘action-for-action’ principle.”

Moon’s remarks represent a more detailed version of his June 15 address in which he said he will pursue talks “without any conditions” if the North stops additional nuclear and missile tests. He also displayed his resolve to discuss denuclearization and a peace treaty in parallel, as well as the normalization of North Korea-US ties, in exchange for a nuclear moratorium. 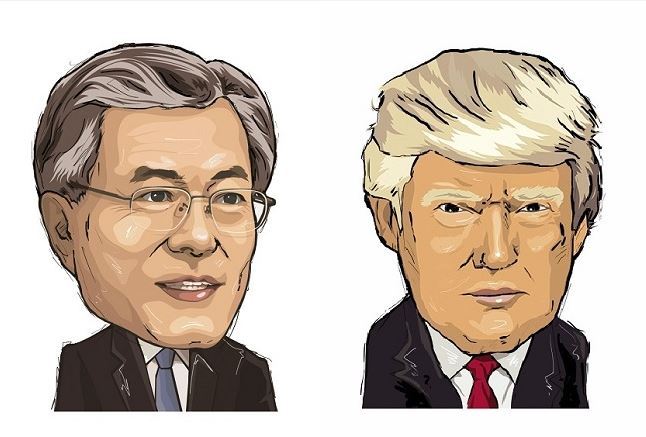 The “action-for-action” principle is enshrined in a watershed Sept. 19, 2005 agreement of the six-nation talks. The joint statement calls for the parties to “take coordinated steps” on denuclearization “in a phased manner in line with the principle of ‘commitment for commitment, action for action.’”

The proposal, however, faces murky prospects amid the increasingly hostile sentiment in the US toward Pyongyang in the wake of its ceaseless military provocations and the tragic death of Otto Warmbier shortly after his release from a 16-month detainment.

The overall diplomatic and security environment has undergone extensive changes since the 2005 deal, with the North apparently inching closer toward acquiring a nuclear-tipped intercontinental ballistic missile capable of striking the US mainland.

The Kim Jong-un regime has also repeatedly made clear through state media and 1.5 Track meetings that it is not willing to denuclearize and would only agree to arms reduction talks instead.

Given the regime’s unwavering nuclear ambitions, its track record of reneging on past promises and deep-seated mutual mistrust, any freeze deal itself may be far-fetched for now, experts say.

For Moon’s part, it remains unsure whether his fledgling administration had been able to develop solid logic and meticulous action plans with which to tackle Washington’s doubts and convince his hawkish counterpart.

About a month and a half into his swearing-in, Moon has yet to embark on a comprehensive North Korea policy overhaul and a slew of key posts remain vacant including defense and unification ministers, whereas the Trump leadership has settled on the “maximum pressure and engagement” strategy following its own review.

“I have not seen any US interest in the suspension proposal. Trump wants to keep up pressure on North Korea,” Bonnie Glaser, a senior adviser for Asia at the Center for Strategic and International Studies in Washington, said via email.

“In my view, suspension of nuclear tests is not sufficient. … The question remains whether such a deal should take place in the absence of North Korea’s return to its commitment to eventually give up all its nuclear weapons.”

The view was echoed by David Straub, a former State Department Korea expert and currently the Sejong-LS Fellow at the Sejong Institute in Seoul. Though it desires a negotiated settlement, the Trump administration is unlikely to seek a freeze deal without Pyongyang’s clear denuclearization commitment, which could rather undermine its efforts to apply “maximum pressure,” he said.

“As long as North Korea is insisting it will never even consider giving up nuclear weapons, a freeze would inevitably be regarded by the international community as the US’ de facto acceptance of North Korea as a nuclear weapons state for the indefinite future,” Straub said.

“The Moon administration is much more optimistic that talks themselves would result in good things. It will be very difficult for the two presidents to completely bridge this gap.”