Every year heat wave warnings come earlier and earlier, and record temperatures no longer come as a surprise.

According to the Korea Meteorological Administration, Korea’s annual average temperature has increased by 1.7 degrees Celsius between 1912 and 2008. In comparison, the global average saw an increase of 0.74 degrees Celsius over the same period.

Korea’s faster climate change is thought to have been aggravated by rapid urbanization.

“About 20 percent to 30 percent of the rise is thought to have been caused as a result of urbanization,” the KMA said in a report.

The report also states that the rate of temperature increase has risen after the 1950s, when urbanization really began in Korea. According to the report, the rate of increase for 1950s onward is about 1.5 times higher than that for the first half of the 20th century.

For the time being at least, such changes are little more than inconvenience to many of the humans that inhabit the Korean Peninsula. Produce prices may fluctuate, and electricity bills may grow in the summer months, but the fundamentals remain for the large part remain the same.

For plants and animals -- both wild and domesticated -- the changes imposed on them by rising temperatures are much more fundamental.

Frogs have been observed not only stirring from their hibernation but also mating in February, which normally occurs in March or later in Korea, and isolated incidents of spring flowers blooming in the dead of winter made headlines in recent years.

In recent years, scientists have observed changes in the lifecycles of animals and plants. From black-tailed gulls laying eggs earlier and earlier and a banana tree bearing fruit in Korea, to some marine animals all but disappearing from Korea’s seas, the flora and fauna of the peninsula are bearing the brunt of climate change.

The change in a seagull species’ breeding season is only the beginning. Korea’s becoming warmer is turning migratory birds into permanent fixtures, and attracting subtropical species to the southern parts of the peninsula.

Egrets and herons were known as migratory birds that spent summer in Korea as recently as the 1990s, but now they can now be seen here even in the winter.

A study conducted in the early 2000s showed that the number of herons spending the winter in South Jeolla Province’s Yeongsan River rose from 55 in 2003 to 149 in 2006.

The list goes on. A pheasant-tailed jacana, usually a resident of India and Indochina, has been observed nesting in Upo Wetland of South Gyeongsang Province. Another resident of Indochina, the crested myna, has been spotted off the coast of Incheon, while more than a dozen species of tropical and subtropical birds have been seen in Jeju Island.

The situation in the seas surrounding the peninsula is the same.

According to the National Institute of Fisheries Science, Korea’s average sea temperature has increased 1.11 degrees Celsius between 1968 and 2015. During the same period, the global average grew by 0.43 degrees Celsius.

Species that prefer colder waters such as Pollock have become scarcer and scarcer, prompting the government to launch a breed-and-release program. The place of such cold-water species are being filled by those commonly associated with the country’s southern seas, and even warmer waters. 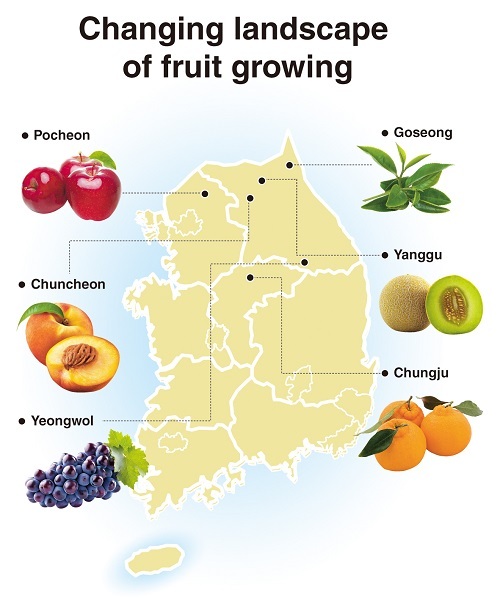 Hallabong organges, which back in 1980s only grew on the southern island of Jeju, can be found in Chungju, North Chungcheong Province, now. Boseong on the southwest coast has been known for its picturesque green tea fields, but it may have to cede the title of South Korea’s green tea capital to regions further up in the north. Tea plants now grow even in Gangwon Province’s Goseong. While traditional fruit production is moving northward, tropical fruits such as mangos and melons, are taking root in southern regions.

Measures to counter such changes, however, are aimed mostly at helping the humans. Helping the humans that cultivate the land to raise different crops, and helping humans to regain access to fishes that have left the now-warmer waters.