[Monitor] Nearly half of Korean workers pay no income tax 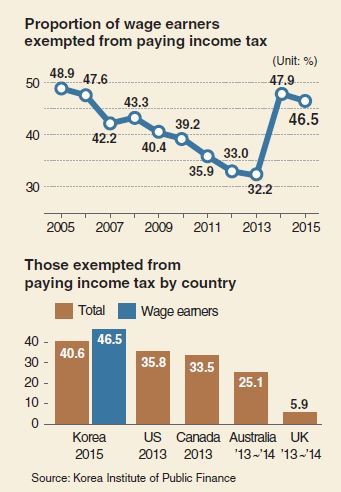 Nearly half of South Korean workers paid no income tax in 2015, a state-run think tank‘s report showed Tuesday.
According to the report by the state-run Korea Institute of Public Finance, 46.5 percent of 17 million wage earners were exempted from paying income tax in the year, jumping from 32.2 percent in 2013. The increase was attributed to the government’s change of income tax deduction programs in 2014 to allow higher deduction rates to low income earners.
The proportion in Korea was higher than that of other advanced countries such as the US, where those exempted from income tax stood at 35.8 percent in 2013.