Youth employment, however, continues to stagger while the number of employees in manufacturing fell for the 11th month running, the data also showed.

Statistics Korea said Wednesday that in May, a total of 26.8 million people were employed, up 375,000 from a year before.
While the increase is slightly lower than that of March and April, it remains to hover above the 300,000 mark, the statistics showed. 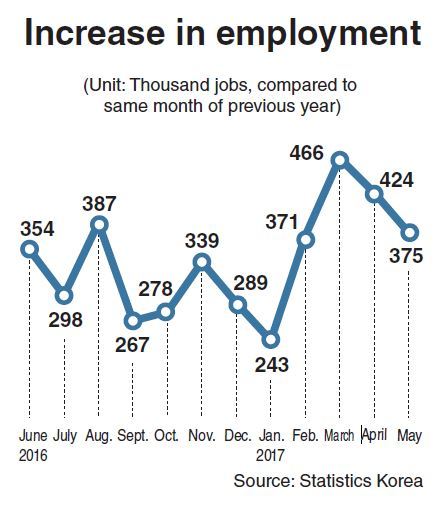 By industry, the employment expanded in construction, educational services and real estate and leases, while it shrank in transportation, manufacturing, finances and insurance services.

The manufacturing sector, which is responsible for one-fifth of the country’s total hiring, shed 25,000 jobs last month. The number of business owners, on the other hand, surged by 51,000 on-year.

The employment rate among those aged 15-64, a standard age group for comparison with the Organization for Economic Cooperation and Development, came to 67.0 percent, up 0.7 percentage point from the previous year.

But the “real unemployment rate,” which takes into account those working part-time jobs while seeking for permanent work and those preparing for recruitment, marked 11.0 percent, up 0.2 percentage point.

The real unemployment rate for the youth, in particular, jumped 0.9 percentage point to 22.9 percent.

The number of economically inactive population reduced by 25,000 from a year ago to 15.9 million.

“While the overall indexes look to be sound, those for specific groups, such as that of those in their 20s, have room for improvement,” said Bin Hyun-joon, head of the agency’s employment statistics division.

A Strategy and Finance Ministry official explained that the rise in the employment number derives from an increase in the temporary workers in the construction industry and that the quality of employment remain weak especially among the youth. Last month, some 162,000 workers were hired by builders on the back of booming property market.

The ministry plans to continue pushing for the supplementary budget to implement policies to create jobs and help the younger generation find work, and to mediate high-quality job opportunities between job seekers and small and mid-sized companies.