Moon's policy advisory panel has instructed the ministry to come up with the name of the president's policy, which would include key words of peace and economy based on his pledges made on his campaign trail, they said. 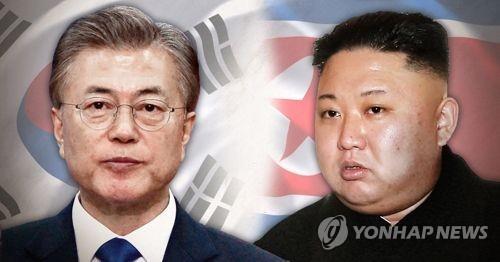 The chief executive said that he will seek to solve North Korea's nuclear issue and pursue economic cooperation by building new economic belts with North Korea. He also presented the formation of an integrated market over the long term and a vision for clinching a new inter-Korean basic agreement.

Since the administration of liberal President Kim Dae-jung, South Korea's inter-Korean policy has a special name to symbolize a leader's North Korea policy.

Conservative President Lee Myung-bak pursued the so-called "denuclearization, opening and 3,000 dollars" strategy. This called for Seoul to help the North attain a per capita income of $3,000 if the communist country gives up its nuclear weapons.

Some foreign media came up with the term "Moonshine" policy for Moon's strategy on the belief that he is likely to succeed the spirit of Kim's Sunshine policy.

"The ministry is mulling over a term that can comprehensively and precisely reflect Moon's North Korea policy," a ministry official said. (Yonhap)