By Korea Herald
Published : Jun 7, 2017 - 14:07       Updated : Jun 7, 2017 - 17:03
The new government’s push for a steep increase in the minimum wage has raised concerns that job opportunities for low-income, low-skilled workers will decrease as many small companies and self-employed businesses are forced to close or cut the number of employees. 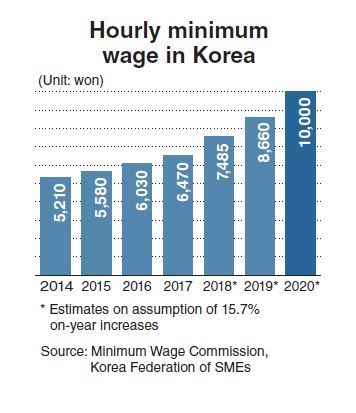 The measure will increase the number of minimum wage workers from 3.36 million to 8.82 million over the cited period.

Officials at the federation note these estimates have not counted in the increases in payment for higher-wage workers, which are likely to follow a minimum wage hike.

The increased wage burdens may prove unbearable for many small companies that have been struggling to stay afloat amid a prolonged downturn.

“The measure to raise the wage floor to 10,000 won would run the risk of rattling the foundation of survival for SMEs,” said Noh Min-sun, a researcher at the Korea Small Business Institute, noting that operating profits-to-sales hovers below 3 percent for most small and midsized firms.

Heavier labor costs may also prompt more SMEs to transfer production facilities to Vietnam and other developing countries in search of lower wages.

Overseas investments made by Korea’s small and midsized companies last year exceeded $6 billion, the most since 1980 when related data began being compiled, according to the Export-Import Bank of Korea.

The deepening of this trend would exacerbate the country’s jobless problem, given SMEs hire nearly 90 percent of local workers.

The planned minimum wage hike will also make it difficult for most self-employed businesses hiring a few part-time and temporary workers to maintain operations.

The additional wage costs to be borne by them over the coming three years is estimated to reach 36 trillion won, according to an association of self-employed individuals.

Labor groups argue that Korea’s minimum wage remains below those in other advanced nations, noting it ranks No. 17 among 25 members of the Organization for Economic Cooperation and Development that have introduced a minimum wage system.

President Moon Jae-in took note of the ranking when he pledged to increase the minimum wage during his campaign for the May 9 election.

But employers say the OECD ranking can hardly be a base for objective comparison, as the minimum wage in Korea comprises basic pay and fixed allowances, while those in many European countries include bonuses and various allowances.

In terms of the minimum wage level relative to per capita gross national income, Korea ranks seventh, according to figures from the Minimum Wage Commission.

Experts note that reducing the number of employees paid less than the minimum wage may be more important than raising the wage floor.

According to an analysis by the Bank of Korea, the number of underpaid employees is projected to exceed 3 million this year, up from 2.5 million in 2015, with their proportion of the workforce forecast to increase from 13.3 percent to 16.3 percent over the cited period.

Skepticism has also been raised over the effect of a minimum wage hike on reducing income inequality in the country.

Contrary to its purported purpose of supporting low-income workers, critics note, minimum wage increases have mainly helped boost the incomes of the middle class, who account for more than 40 percent of employees entitled to the minimum wage.

Behind the discrepancy between poor households and low-income workers is a change in the country’s socioeconomic structure.

In the past, most households depended on a single breadwinner, typically a male householder working full-time. With female employment and flexible working hours expanding, there have been more household members engaged in economic activity.

This change has increased the possibility that a low-wage worker belongs to a middle-class or even a high-income household.

Self-employed businesses such as restaurants, bakeries, retail stores and repair shops in provincial areas raise the need to differentiate the minimum wage in accordance to regional differences in income and living costs.

A uniform minimum wage has been applied to all workplaces across the country since Korea introduced the wage floor system in 1988.

Wages based on minimum living costs in Seoul and its vicinity may feel relatively higher in provincial areas where prices are less expensive.

Japan has set different minimum wages by region and industry since it put the scheme into practice in 1959.

The US minimum wage, which was introduced in 1938, differs across the 50 states, though the federal government suggests basic guidelines.

Bae Gyu-sik, a researcher at the Korea Labor Institute, said consideration might be given to adopting different minimum wages in parts of the country before deciding on a nationwide introduction.