In August 2014, the Park Geun-hye administration allowed households to easily borrow money by raising the cap ratios of debt-to-income and loan-to-value to 60 percent and 70 percent, from 50-60 percent, respectively. The deregulatory moves, blamed for snowballing household debt and real estate speculation in southern Seoul, expire at the end of July.

During his presidential campaign, Moon took a cautious stance towards real estate policies. He took out the phrase “normalizing DTI and LTV ratios” from among his pledges at the last minute, replacing it with “introducing a debt service ratio” and toning down his stance on regulation.

Using a debt service ratio means lenders should consider not only mortgage loans, but other borrowing, such as credit card debt and car installment plans when assessing an individual’s eligibility for loans.

However, Moon’s pick of Rep. Kim Hyun-mee of the Democratic Party of Korea as the nominee for minister of land, infrastructure and transport has raised the possibility that the government might tighten DTI and LTV rules back to pre-2014 levels, observers said.

Immediately after being nominated for land minister last week, Kim explicitly told reporters that “deregulation on LTV and DTI was the culprit behind rising household debt.”

The need for a renewed policy move has risen especially after the housing market showed continued price hikes.

Home prices in Seoul rose 0.13 percent over the last week of May, according to data compiled by Kookmin Bank. That marked the first time in seven months the price rose more than 0.1 percent weekly.

The data also showed that housing prices in Seoul rose for 17 consecutive weeks. 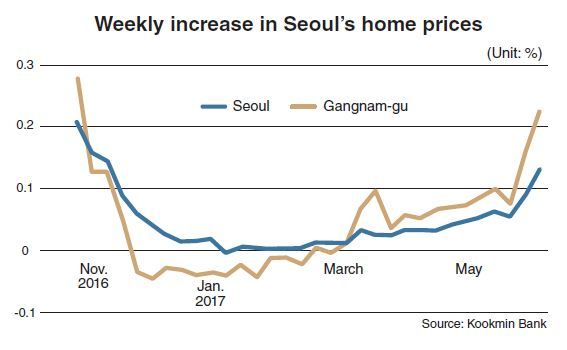 South Korea’s high-end districts south of Han River, such as Gangnam-gu, led the price hike. Prices of real estate assets in Gangnam-gu surged 0.22 percent on average, while those in the adjacent Seocho-gu soared 0.23 percent, both of which reached nearly eight-month peaks.

Home prices in Seoul seemed to have abated through April, since the new real estate policy was unveiled Nov. 3 to ban the transfer of home purchasing rights in four affluent districts -- Gangnam, Songpa, Seocho and Gangdong -- in Seoul, along with Gwacheon, Gyeonggi Province. However, imminent reconstruction in the districts south of the Han River appears to have triggered the recent price hike, experts said.

The estimated 39.8 trillion won overdraft as of the end of May came as it rose by 1.43 percent from the previous month, the largest on-month margin of 2017.

South Koreans have taken to loans that lead their account balance to below zero but within the authorized overdraft limit in order to secure enough cash to afford to buy a house. Moreover, the overdraft is used to avert the regulatory barrier, since overdraft is not considered as a loan when the loan-to-value ratio of a borrower is calculated.

To curb rising household debt, Financial Supervisory Service Gov. Zhin Woong-seob said the FSS should decide the policy direction on LTV and DTI “within a short period of time.”

Kim Dong-yeon, the nominee for deputy prime minister and finance minister, said he would decide on the LTV and DTI policy direction while monitoring the rising trend of household debt, in a written reply to Rep. Park Young-sun of the Democratic Party’s question for his upcoming parliamentary confirmation hearing.

Easy borrowing rules, combined with the Bank of Korea’s all-time-low interest rate at 1.25 percent, have contributed to the fast growth of household debt, which reached a record high of 1,359.7 trillion won as of the end of March.