By Shin Hyon-hee
Published : May 29, 2017 - 16:05       Updated : May 29, 2017 - 19:36
North Korea’s recent series of missile tests poses a challenge to the alliance between South Korea and the US, constraining the choices of the Moon Jae-in government even before his planned first summit with Donald Trump amid a global sanctions and pressure campaign against Pyongyang.

South Korea’s Joint Chiefs of Staff said Pyongyang launched at least one Scud type projectile from its eastern coast Monday morning, its ninth ballistic missile test and third provocation since Moon took office on May 10, vowing to reopen dialogue with the communist neighbor.

The latest liftoff came two days after the leaders of the Group of 7 leading economies issued a joint statement calling for “redoubled“ efforts to implement relevant UN Security Council resolutions and warning of tighter sanctions. In separate bilateral talks, Trump told Japanese Prime Minster Shinzo Abe that North Korea is “a big problem and will be solved.”

With North Korea remaining defiant nonetheless, Seoul and Washington appear to be seeking separate ways to contain Pyongyang’s provocations while struggling to find a balance between domestic and external issues.

Twenty days into its inauguration, the Moon leadership is struggling to form a Cabinet in the face of criticism over a string of allegations of irregularities involving prime minister, foreign minister and other top post nominees. The clock is ticking, with less than a month left before the summit with Trump, which would be all the more crucial for policy coordination especially as Seoul is believed to be eyeing Aug. 15 Liberation Day as a possible chance to foster rapprochement with the communist neighbor. 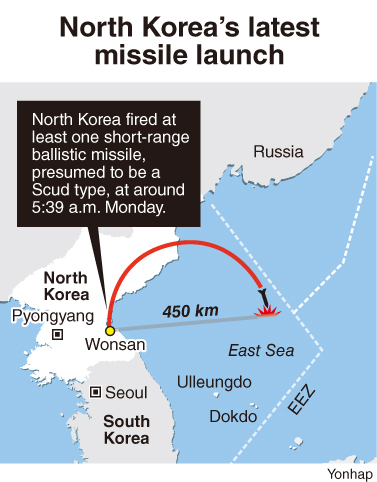 The Trump administration, which has recently settled on its North Korea policy focusing on “maximum pressure and engagement,” is grappling with an ever-widening probe into alleged connections between top presidential aides and Russian officials.

“Rather than the missile launch targeting the Moon government, it seems that North Korea is acting according to its own schedule with the goal of advancing its nuclear and missile capabilities,“ said Koh Yu-hwan, a professor in North Korea studies at Dongguk University in Seoul.

“With the new South Korean government taking office, there would be efforts by Seoul, Washington and Beijing to come up with a new solution on North Korea. So Pyongyang would try to maximize its nuclear and missile capabilities before any talks get under way so as to boost its future negotiating power.”

China also remains another factor that could complicate the allies’ efforts. After Pyongyang test-fired the Pukguksong-2 new intermediate-range ballistic missile on May 21, the UN Security Council blasted it as a violation of its sanctions but fell short of reaching agreement on a new resolution due chiefly to China’s opposition.

US Ambassador to the UN said the council is pushing for a new resolution, and the envoys of the UK and France also called for tougher sanctions. But their Chinese counterpart Liu Jieyi said the discussions were “hypothetical,” expressing skepticism.

“There haven‘t found common ground until now (between South Korea, the US and China,) though they have managed to find some common factors -- intolerance of North Korea’s nuclear weapons, finding an imminent solution, and opposition to a regime change,” Koh said.

“The US has been outsourcing the North Korea problem to China, and China has to show results, so it will be difficult for South Korea to move on its own to undermine the current pressure campaign.”