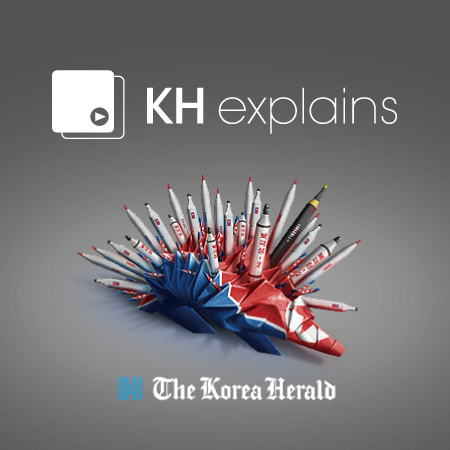 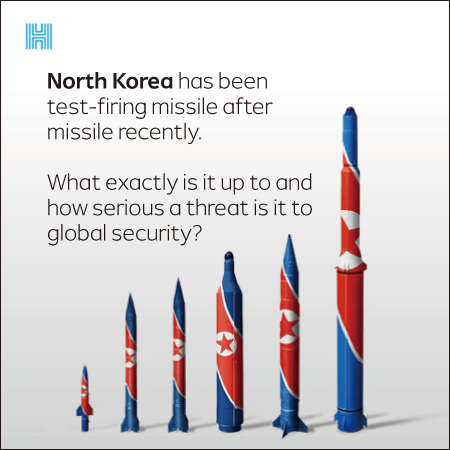 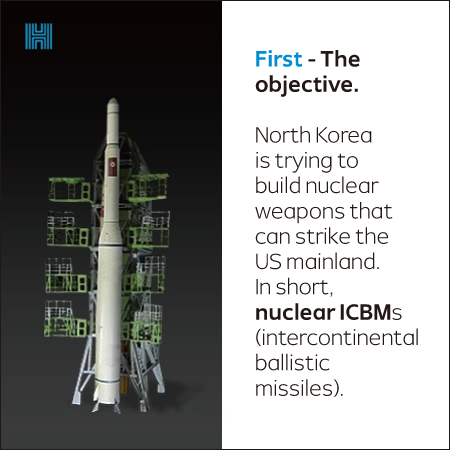 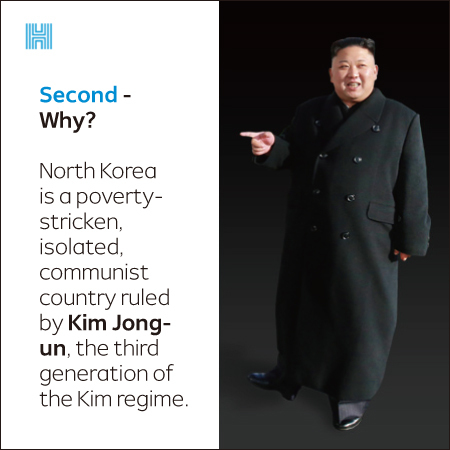 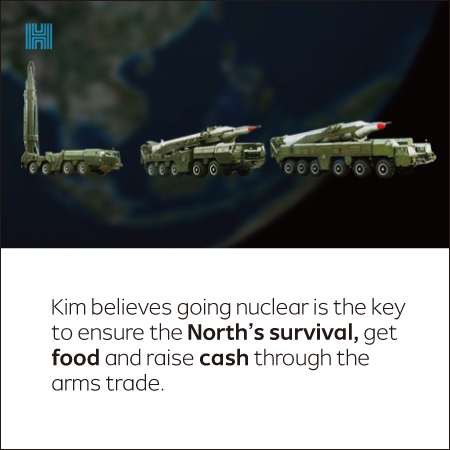 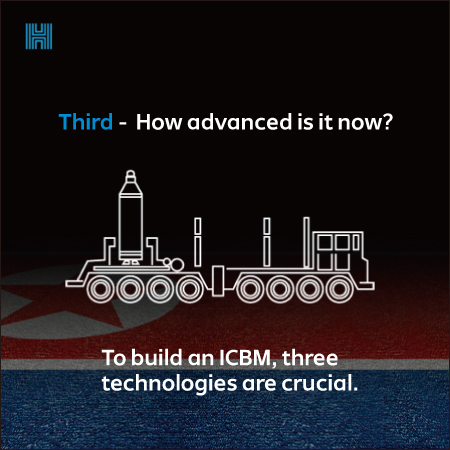 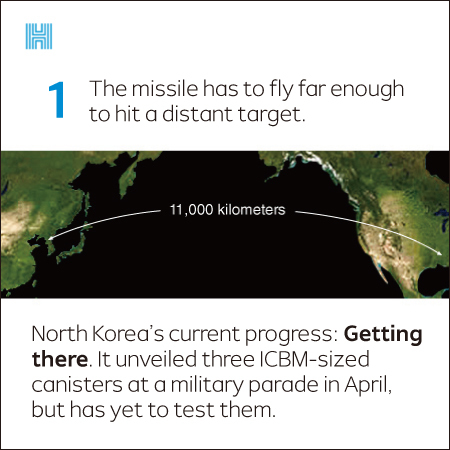 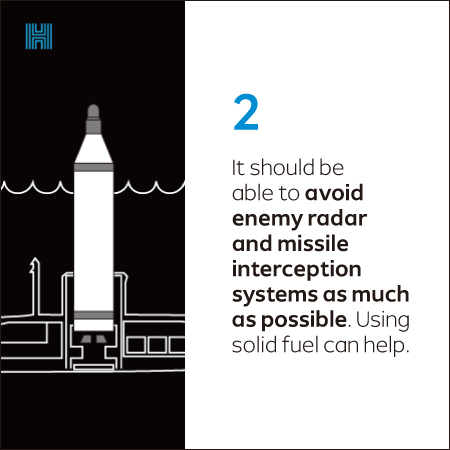 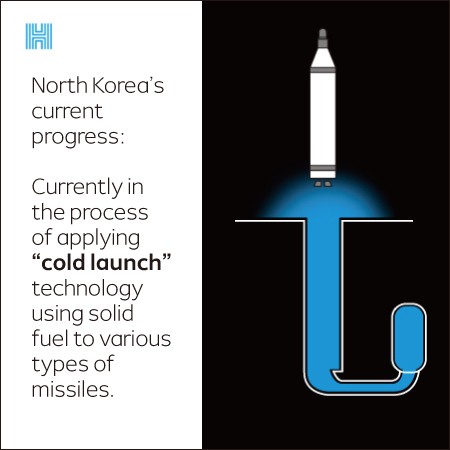 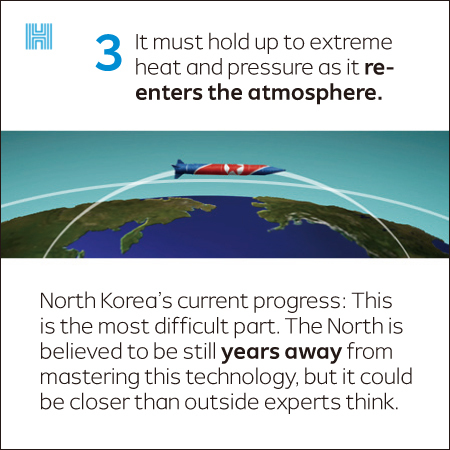 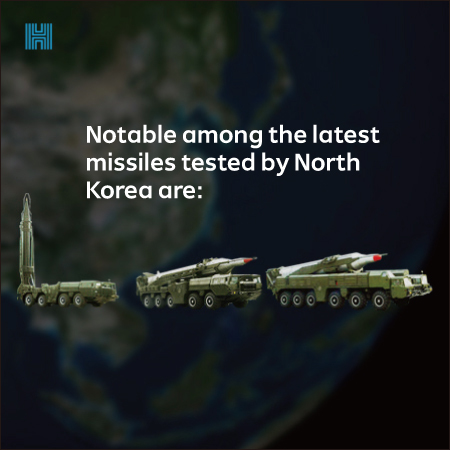 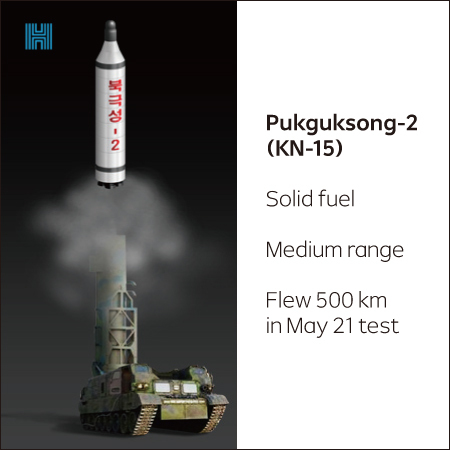 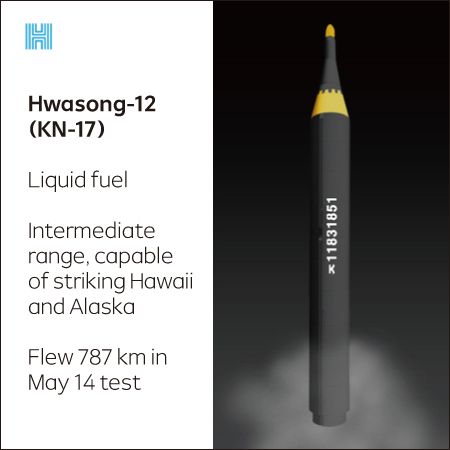 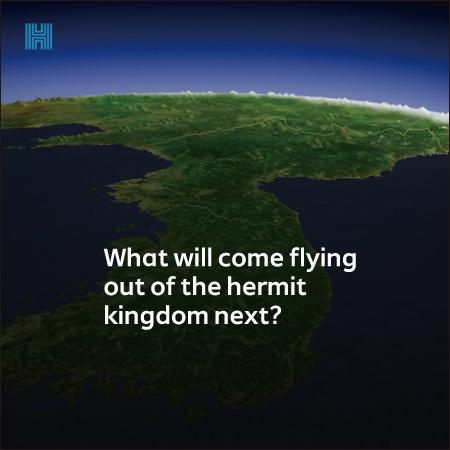 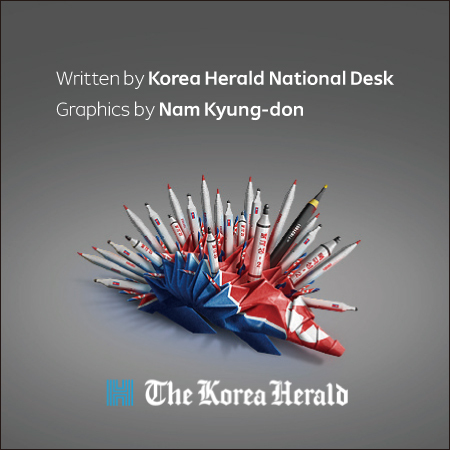 North Korea has been spurring its missile development at an unprecedented pace since last year, seeking to diversify its missile lineup and delivery means and thus boost its deterrence against the US.

The ultimate objective of North Korea’s nuclear and missile program is to secure the capability to hit the US with a nuclear-equipped missile, which will ensure the regime’s survival and give it greater negotiating power.


2. How far the North has come before acquiring an ICBM?

To make a nuclear weapon useful, delivery vehicles and miniaturized warheads to mount on missile should be premised.

North Korean leader Kim Jong-un claimed last January to be in the final stage of testing an intercontinental ballistic missile capable of reaching the US mainland.

Recent launches indicate the country is making substantial headway, but building an ICBM requires it to overcome the biggest hurdle of securing the re-entry technology, which despite Pyongyang’s claim experts say has not yet been mastered.


3. Why does the re-entry technology matter?

An ICBM leaves the Earth’s atmosphere like a space launch vehicle. But for it to return a warhead back through the atmosphere intact, it needs technology with which to withstand extreme heat and pressure occurring during the re-entry.

This is a significant challenge because for an ICBM, re-entry speeds can reach 7 kilometers per second, and the temperature as high as 8,000 degrees Celsius.

Following its successful launch of the mid-range Hwasong-12 on May 14, North Korean state media argued that the test proved the missile is capable of surviving “under the worst re-entry situation.” But the claim has not yet been verified.


4. What are the new missiles North Korea claims to have successfully tested?

On May 21, North Korea fired the Pukguksong-2, also known as KN-15, which flew about 500 kilometers before falling into the East Sea, reaching an altitude of 560 kilometers, according to Seoul’s Joint Chiefs of Staff, its second round after the initial successful test on Feb. 12.

On May 14, Pyongyang claimed new IRBM called the Hwasong-12 flew 787 kilometers and reached an altitude of 2,111.5 kilometers, capable of striking Hawaii and Alaska.


5. What’s the significance of the tests in technological progress?

The Pukguksong-2 showed some striking features in the May 21 test. State media said it verified the missile’s reliability and accuracy of the cold launch system from a caterpillar-style tracked transporter erector launcher, the high thrust solid fuel engines and the guidance and stabilization features of the nuclear warhead recorded by a built-in device.

North Korea traditionally relied on liquid fuel, which is relatively cheap yet corrosive and cannot be stored in the missile, requiring it to accompany fuel and oxidizer trucks which makes it easier to be spotted from satellites.

In contrast, solid fuel can generally be stored in the missile, takes a shorter launch process and makes it difficult for satellites to detect.

The Pukguksong-2 was also the first road-mobile missile to employ a cold launch system, which uses compressed gas pressure to eject the missile from the erected canister on the ground before igniting the rocket motor.

This system does not require additional volume within the launcher for exhaust plume control, making it feasible to launch from a confined space. Unlike hot launch systems, a cold launch also lowers the possibility of damage or destruction of the TEL in the event of missile failures, since they would happen in mid-flight rather than on the ground, according to Chang Young-keun, a professor of aerospace and mechanical engineering at Korea Aerospace University in Seoul.