Trump's view of Kim Jong-un: from 'smart cookie' to 'madman'

By Shin Hyon-hee
Published : May 24, 2017 - 16:07       Updated : May 24, 2017 - 20:09
From maniac to smart cookie to madman, US President Donald Trump’s descriptions of North Korean leader Kim Jong-un has varied extensively, sparking criticism that it may send misleading messages not only to Pyongyang, but to allies and friends.

Trump called Kim a “madman with nuclear weapons” during a phone call with Philippines President Rodrigo Duterte last month, according to a transcript of the conversation written by Manila and obtained Tuesday by The Washington Post. 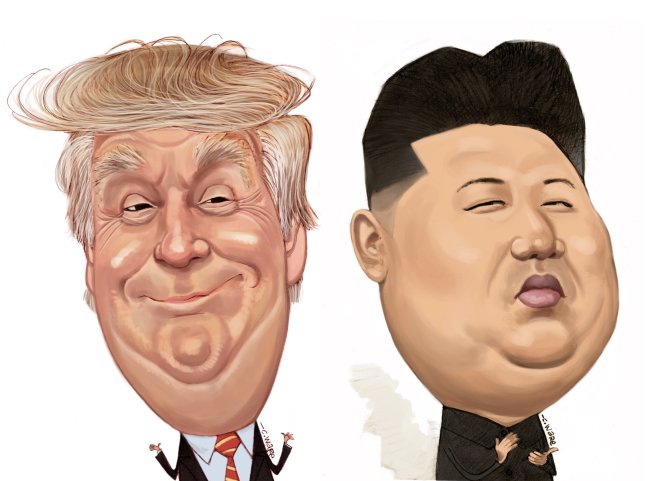 
The description contrasted with Trump’s remarks made only two days earlier to Bloomberg News that he would be “honored” to meet with the young dictator, which raised the possibility for dialogue following weeks of saber-rattling. In another interview the same week with CBS News, Trump called Kim a “pretty smart cookie,” saying he has managed to consolidate power “at a very young age.”

Following are some of President Trump’s comments about the North Korean leader, compiled by The Korea Herald.

“We can’t let a madman with nuclear weapons on the loose like that. We have a lot of firepower, more than he has, times 20 — but we don’t want to use it.” (In an April 29 phone call with Philippines President Rodrigo Duterte, according to a transcript obtained on May 23 by The Washington Post)

“If it would be appropriate for me to meet with him, I would absolutely -- I would be honored to do it. If it’s under the -- again, under the right circumstances. But I would -- I would do that.” (In a May 1 interview with Bloomberg News)

“I can tell you this, and a lot of people don‘t like when I say it, but he was a young man of 26 or 27 when he took over from his father, when his father died. He’s dealing with obviously very tough people, in particular the generals and others. And at a very young age, he was able to assume power. A lot of people, I‘m sure, tried to take that power away, whether it was his uncle or anybody else. And he was able to do it. So obviously, he’s a pretty smart cookie.” (In an April 29 interview with CBS News)

“He‘s 27 years old, his father dies, took over a regime, so say what you want but that’s not easy, especially at that age. You know you have plenty of generals in there and plenty of other people that would like to do what he‘s doing. So I’ve said this before and I‘ve, I’m just telling you, and I‘m not giving him credit or not giving him credit. I’m just saying that‘s a very hard thing to do.”

“As to whether or not he’s rational, I have no opinion on it. I hope he‘s rational.” (In an April 27 interview with Reuters)

“I hope there’s going to be peace, but they’ve been talking with this gentleman for a long time. You read (Bill) Clinton’s book and he said, ‘Oh, we made such a great peace deal’ and it was a joke.”

“You look at different things over the years with President Obama. Everybody has been outplayed. They’ve all been out-played by this gentleman, and we’ll see what happens.” (In an April 17 interview with Fox & Friends)

“We are sending an armada, very powerful. We have submarines, very powerful, far more powerful than the aircraft carrier, that I can tell you. And we have the best military people on Earth.”

“And I will say this. He is doing the wrong thing... He‘s making a big mistake.” (In an April 11 interview with Fox Business)

“What the hell is wrong with speaking? And you know what? It’s called opening a dialogue. It’s opening a dialogue. But there’s nothing -- I wouldn’t go there. That I can tell you. If he came here, I’d accept him, but I wouldn’t give him a state dinner like we do for China and all these other people that rip us off when we give them these big state dinners. We give them state dinners like you’ve never seen. We should be eating a hamburger on a conference table, and we should make better deals with China and others and forget the state dinners. Who the hell cares? I’ll speak to anybody. Who knows? There’s a 10 percent or a 20 percent chance that I can talk him out of those damn nukes because who the hell wants him to have nukes? And there’s a chance -- I’m only gonna make a good deal for us.” (In a June 15, 2016 rally in Atlanta)

"I would speak to him, I would have no problem speaking to him."

“I would get China to make that guy disappear, in one form or another, very quickly.” “This guy‘s a bad dude.”

“Any young guy who can take over from his father with all those generals and everybody else that probably want the position -- this is not somebody to be underestimated.” (In a Feb. 10, 2016 interview with CBS News)

“If you look at North Korea -- this guy, he’s like a maniac, OK? And you have to give him credit. How many young guys -- he was like 26 or 25 when his father died -- take over these tough generals, and all of a sudden -- you know, it’s pretty amazing when you think of it. How does he do that? Even though it is a culture and it’s a cultural thing, he goes in, he takes over, and he’s the boss. It’s incredible. He wiped out the uncle. He wiped out this one, that one. I mean, this guy doesn’t play games. And we can’t play games with him. Because he really does have missiles. And he really does have nukes.” (In a Jan. 9, 2016 speech in Iowa)