By Son Ji-hyoung
Published : May 16, 2017 - 17:04       Updated : May 16, 2017 - 18:09
Expectations of strong policy drives by President Moon Jae-in are leading to forecasts of a further Kospi rally and a stronger local currency, offsetting rising worries about geopolitical risks.

“The policy uncertainty settled down through the presidential election,” Han said, citing the Economic Policy Uncertainty index’s sharp drop over the last few months -- from 389.36 in January to 130.52 in April.

Han added the Moon administration is expected to proactively raise its voice over relations with the United States and China, another reason for the potential of stocks to rise further.

“Seoul has long failed to engage the two powerhouses, out of fear of retaliation from either side,” he said, expecting the phenomenon of Korea being left isolated between the two countries would wane upon his inauguration.

Seo Bo-ick, an equity strategist at Eugene Investment & Securities, said the latest sharp rise in the Kospi should not come with concerns of a bubble burst.

“South Korean companies overall saw robust growth in the first quarter of this year, outpacing that of Kospi rise,” he said. “In addition, the price-earnings ratio has dropped, heralding the Kospi’s further rise.” 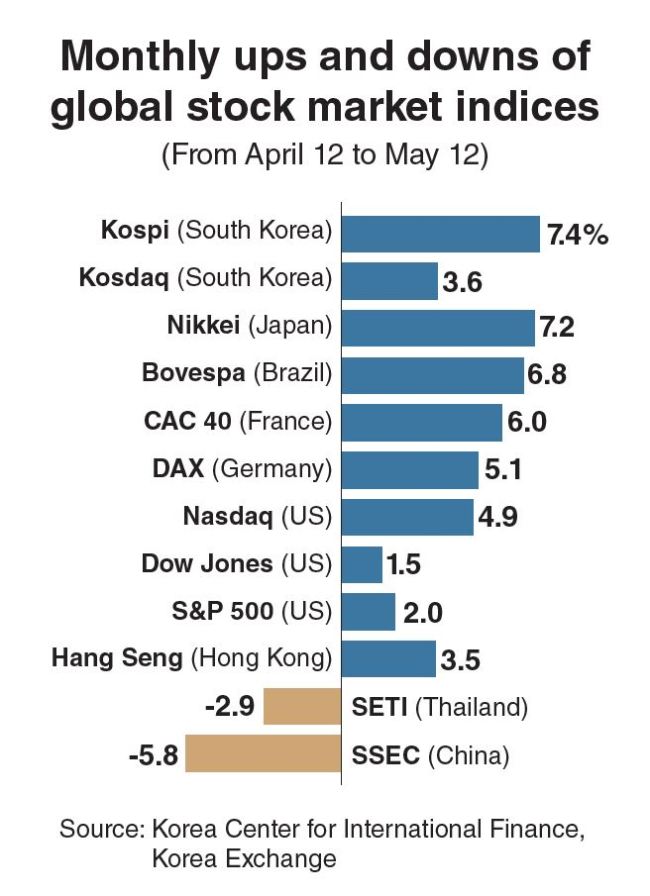 Another financial report projected that Kospi would reach 4,000 by the end of Moon’s tenure. Hong Kong-based investment bank CLSA in a report Monday cited expectations for local firms’ improvements in corporate structures, as their complex structures have long reduced the appetite for Korean stocks.

CLSA added that in light of drastic changes in the political landscape from late last year, it expected Moon to take strong action that would support South Korean stocks.

Seo Sang-young of Kiwoom Securities, however, estimated the momentum would be “limited,” as persisting political uncertainties in the US surrounding the dismissal of FBI Director James Comey and US President Donald Trump’s nomination of a new director might “pose a burden on South Korean stocks.”


Regarding the dollar-won exchange rate, analysts, such as Ha Keon-hyeong of Shinhan Securities, estimated it would begin to hover at around 1,115 won, on the back of the weakening greenback and the increased risk appetite. It had moved around 1,130 won in the past month.

Offshore investors held 23.3 trillion won ($20.9 billion) worth of shares traded on the second-tier Kosdaq market for tech and smaller firms as of Thursday, data from the Korea Financial Investment Association showed.

Foreign ownership stood at 10.98 percent of the total capitalization of all stocks registered with the Kosdaq.