[Monitor] One in five Koreans work 54 hours or more 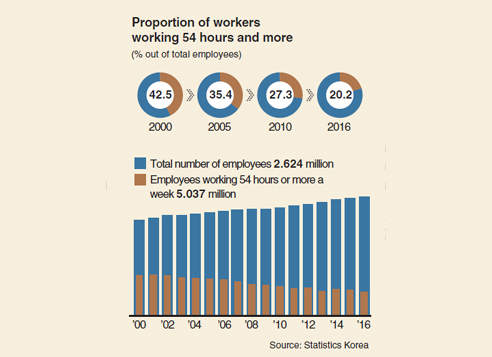 One out of every five employees working in South Korea work 54 hours a week or longer, Statistics Korea‘s data showed Monday.

While the average working hours continued to drop since the introduction of a five-day workweek in 2004, the weekly working hours have remained stagnantly long since 2010.

The number of employees working 54 hours or more a week reached 5.33 million last month, up 507,000 from the same month last year. This means, considering that they take the weekends off, they work nearly 11 hours a day.

There are differing views on how to measure the maximum working hours.

The labor sector, on the other hand, has contended they should include weekends and holidays in counting the maximum working hours of 52 hours.