The ruling Democratic Party said Friday that it will push for a parliamentary hearing on the deployment of a US missile defense system on the peninsula to address "national suspicions" surrounding it.

The party's special panel on the ongoing controversy over a Terminal High Altitude Area Defense  battery also called on the government to suspend the deployment and prepare for a parliamentary ratification. 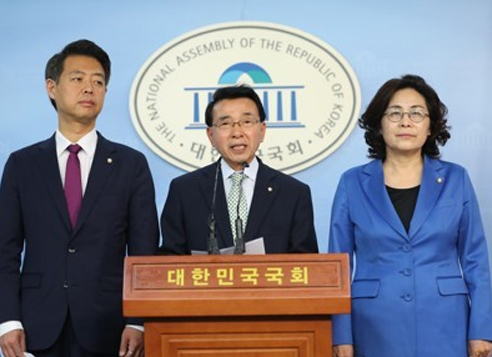 Key THAAD components, such as a powerful radar system, have already been delivered to the deployment site in Seongju, 296 kilometers south of Seoul.

"(We) have to address national suspicions regarding the procedural legitimacy of the THAAD deployment, the illegal installation of THAAD equipment and a possible secret deal (with the US) over the cost-sharing," the panel said in a statement.

"To prevent further national conflict (over the issue), the government should now prepare for procedures to secure parliamentary ratification for it."

President Moon Jae-in and his party have long called for a delay in the THAAD installation, arguing that the former government failed to forge public consensus over the security issue.

A dispute over the deployment has escalated since US President Donald Trump said in a recent media interview that he "had informed Seoul it would be appropriate if they paid" for the $1 billion weapons system.

Seoul has argued that under a bilateral agreement, Washington is financially responsible for the deployment, operation and maintenance of the THAAD battery with Seoul providing the land to host it.

Observers say it remains to be seen whether the ruling party's stance on THAAD can gain overall parliamentary backing.

The party has 120 seats in the 299-member National Assembly.

The main opposition Liberty Korea Party, along with the Bareun Party, has strongly supported the deployment. The conservative parties have 94 and 20 seats, respectively. (Yonhap)