The jobless number reached approximately 1.17 million, up by 99,000. This is the largest number for the month of April and the highest after February’s 1.35 million.

The jobless rate also reached 4.2 percent, up 0.3 percentage point from the same month last year. It is the highest rate after the 4.5 percent recorded in 2000 for the month of April.

The rate of unemployed young people, aged between 15 and 29, reached 11.2 percent -- up from 10.9 percent a year earlier. The youth unemployment rate is the highest figure recorded for the month of April.

The rate, however, has decreased from 12.3 percent in February. 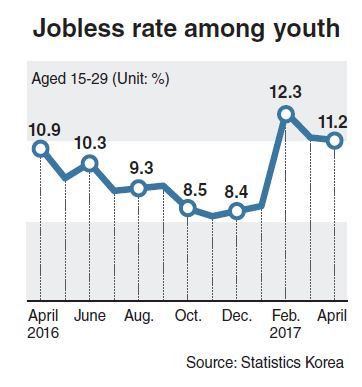 The jobless rate for April among youth has been recording two digits for the past four years. The number of young unemployed has increased by 160,000 from a decade ago.

The number of employed individuals, on the other hand, stood at 26.58 million last month, an increase of 424,000 compared to April 2016, marking a 0.5 percentage point on-year rise. This could be partly due to companies that had previously withheld recruitment opening up jobs since March, in light of improving exports and performances.

According to an official at Statistics Korea, the country’s simultaneous rise in both employment and unemployment rate can be attributed to the increased population of the country’s labor force.

The number of jobs available in Korea increased by a margin of 400,000 for two consecutive months in March and April. The job market, however, did experience a slight decrease last month from 466,000 in March to 424,000 in April.

Statistics Korea attributed much of the employment slump to Korea’s manufacturing sector, which accounts for one-fifth of the country’s total hiring population. The sector has experienced a steady decline in its job market hires for the past 10 consecutive months.

The manufacturing sector recorded 62,000 fewer job hires last month compared to April last year, according to the data. The decline in the number of hired manufacturing workers decreased by 155,000 in January to 92,000 in February, and to 83,000 in March.