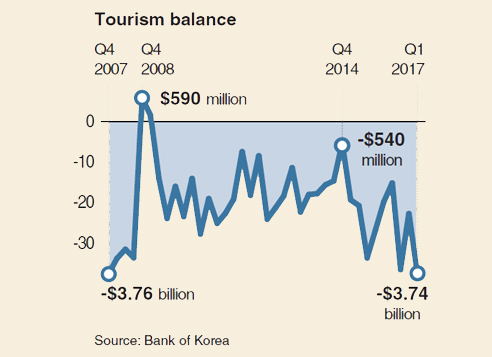 South Korea’s tourism industry recorded a deficit of $3.74 billion as of the end of March, marking a nearly decadelong record high, due largely to drop in Chinese visitors following the ban of Korea-bound trip sales by Beijing this year.

The Bank of Korea said the deficit is the largest since $3.76 billion recorded in the fourth quarter of 2007.

The deficit reached $1.35 billion in March alone, the biggest figure in nearly two years, after Korea saw $1.47 billion in travel deficit for July 2015 due to the outbreak of the Middle East respiratory syndrome.

Since March 15, Chinese travel agencies have been forbidden to sell South Korea-related tour programs to locals in a move considered to be a retaliation against the former Seoul government’s decision to host US missile defense system here.