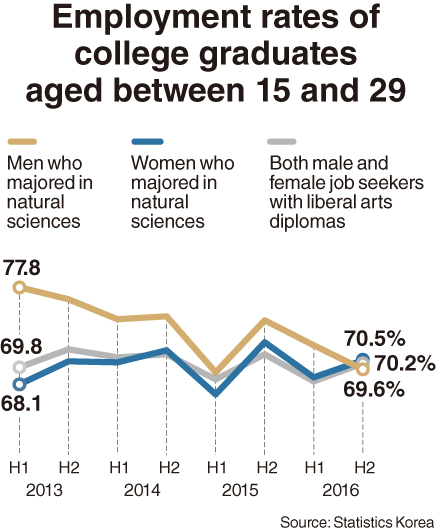 The percentage of young men with natural science diplomas employed in the second half of last year dropped to 69.6 percent at a relatively rapid pace compare to those who studied liberal arts and social sciences, Statistics Korea said Thursday.

Job seekers majoring in natural science had greater job opportunities just two or three years ago, with their employment rate hovering around 77 percent, slightly higher than the average among all majors.

Last year’s rate marked the lowest since 2013, when the government first started to collect related data on people aged between 15 and 29.

The employment rate of young men with liberal arts backgrounds also decreased to 69.7 percent, down 0.5 percent from the previous year.

Meanwhile, the employment rate of young women with natural science diplomas was 70.5 percent.