By Kim Yon-se
Published : May 3, 2017 - 16:29       Updated : May 4, 2017 - 10:54
If the election were held today, Moon Jae-in, a human rights crusader-turned-liberal politician, would take South Korean presidency in a blowout, according to the final batch of opinion polls released before the polling ban took effect Wednesday.

Moon of the Democratic Party of Korea garnered 38-42.4 percent of support, maintaining a considerable lead over his four other main rivals, according to three pollsters – Realmeter, Gallup Korea and Hankook Research. His lead over the runner-up was from 18 to 23.8 percentage points, respectively.

The polls, conducted on Monday and Tuesday and released Wednesday, six days before the May 9 election, also showed centrist Ahn Cheol-soo and conservative Hong Joon-pyo in a tight race for the second spot, with the latter extending his strong upward momentum.

Despite Moon’s huge lead of around 20 percentage points, political watchers remain cautious about predicting the winner. There are several variables that may drastically affect the shape of the race, they warned.

“Many liberal voters seem to have made up their minds (to vote for Moon). On the contrary, a large chunk of centrists and conservatives have a floating mind as to who they should support,” said Park Sang-byung, a professor at Kyung Hee University.

Other political watchers shared the view. While Moon’s support is stable, those of Ahn and Hong are fluctuating and are likely to do more so in the home stretch to the election day. Many right-leaning voters who previously supported Ahn seem to be moving over to Hong, they said.

Professor Park warned that actual vote turnouts could be quite different from poll results at the present stage.

Moa Online researcher Yoon Tae-gon also forecast that the gap between the front-runner and the runner-up usually narrows in the last stage of a race.

“It is hard to predict whether the No. 1 position will eventually be replaced, but the ratings of the second- and third-placed contenders are unlikely to remain similar to the current stage.” 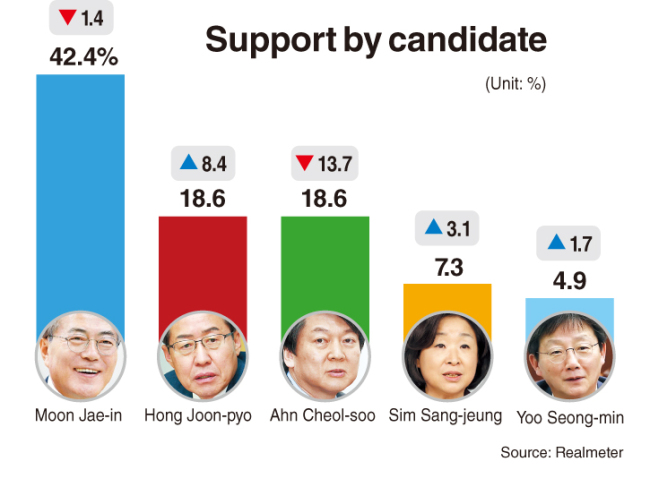 Moon’s camp is on alert for a possible upset by conservatives, urging all liberal voters to consolidate behind him.

Warning that conservative forces behind the corruption scandal of former President Park Geun-hye are seeking a return, he says more than 50 percent of voter support is needed for him to push for liberal reforms.

Meanwhile, the nation’s election law bans publishing of any public opinion surveys that were conducted less than a week before the election.

Advance voting will take place for two days from Thursday.