By Korea Herald
Published : May 1, 2017 - 14:12       Updated : May 1, 2017 - 16:26
In a rare consensus, the five major candidates for next week’s presidential election have pledged to strengthen support for small and medium-sized enterprises as a way to increase employment.

Whoever is elected president, they all say they will promote a governmental agency handling matters related to SMEs, now under the Ministry of Trade, Industry and Energy, to an independent ministerial-level office.

Experts share the presidential candidates’ perception that the country’s deteriorating unemployment problem cannot be eased, let alone settled, unless the gaps in differences and other working conditions between SMEs and large companies are considerably reduced.

The wage gap between SMEs and large companies remains wider than that between regular and irregular workers.

In 2014, small and midsized enterprises accounted for 99.9 percent of the total number of local businesses, hiring nearly 88 percent of workers, showed figures from the Korea Federation of SMEs.

However, nearly a third of SMEs engage in low value-added businesses. 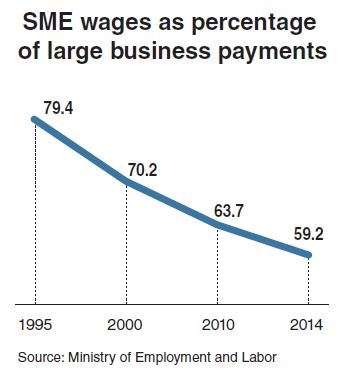 “The country’s labor market is divided into the first league of large corporations and regular jobs and the second league of SMEs and irregular jobs,” said Bae Kyu-shik, a researcher at the Korea Labor Institute, a state-run think tank.

The improving performance of large exports-oriented manufacturing companies has not resulted in an increase in employment partly due to the automation and off-shoring of production.

Government data show the number of jobs in the manufacturing sector declining for a ninth consecutive month in March while the country’s exports have kept a streak of on-year monthly increase since November.

The jobless rate stood at 4.2 percent in March, with the figure for young people reaching a record high of 11.3 percent.

Many SMEs still have difficulty recruiting qualified workers because of severe job mismatches.

A panel on youth employment under a tripartite commission of representatives from the government, management and labor last month called for preventing job mismatches from being structuralized through strengthened oversight over wage payments to SME employees and contracts between large firms and their suppliers.

Many smaller businesses have delayed wage payments to their employees or fail to pay the minimum wage as they are struggling to keep afloat. Eight in 10 SMEs with wages in arrears had less than 30 workers as of 2014.

Guaranteeing fairness in contracts is needed to improve the wage gap as nearly half of SMEs in the manufacturing sector rely on supplying parts to large manufacturers.

A MOTIE official said underpriced payments to subcontractors had been overlooked to some extent to help shore up competitiveness of major manufacturing exporters.

“This should change now,” said the official, who asked not to be named.

He also said unionized workers at large companies should be ready to make concessions to reduce the wage gap with subcontracted workers.

Experts say active measures should also be taken to reduce the wage gap between regular and irregular workers. It is necessary to consider ensuring the same wage for the same work as has been pushed ahead with by Japanese Prime Minister Shinzo Abe’s government, they note.

Bae said it was also important to implement industrial strategies for enhancing the fundamental competitiveness of SMEs and encouraging them to grow into intermediary and large corporations that can compete in global markets.

He stressed it would be impossible to solve the unemployment problem without enabling SMEs to offer better quality jobs, particularly to young job seekers.

In this regard, presidential candidates’ pledges to strengthen support for small firms do not seem concrete and substantial enough to ensure long-term competitiveness of SMEs.

Critics say such pledges -- including financial support for research and development projects, subsidies for employment programs and designation of areas for small businesses -- are nothing but a repetition of the measures taken by previous administrations.

In a symposium last week, Lee Jong-wook, a professor of economics at Seoul Women’s University, called on presidential candidates to specify what the proposed ministerial-level office in charge of SME-related matters will do.

Previous measures focused on protection have been cited as reasons for many smaller businesses to hesitate or refuse to grow further at the expense of being disqualified for support tailored for SMEs.

It is necessary to facilitate the restructuring of marginal firms and provide competitive SMEs with effective incentives to help them grow into intermediary and large companies, experts say.