The features submitted “were filmed with dramatically microscopic views compared to previous years,” according to festival organizers. The respective directors this year seem to have each taken an issue and focused on it with laser-like intensity -- but also with a sense of humor.

“Happy Bus Day” is a dark comedy that immediately stands out. The only one of the 11 films not making its world premiere at the festival derives humor from the familiar source of a dysfunctional family, but takes it to an extreme. 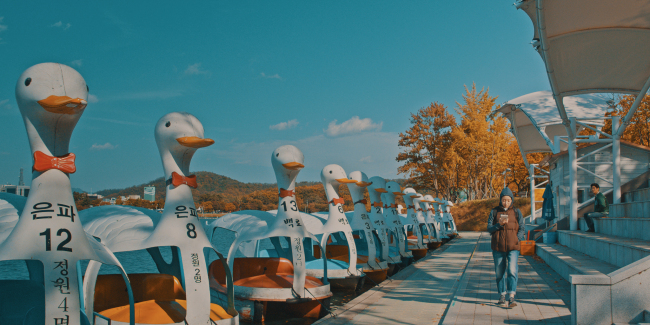 "Duck Town" (JIFF)
The family’s overbearing matriarch gathers together her many children under the pretext of a landmark birthday. But once the children – who include a transgender woman, the spiteful, uncaring sister she shares a room with, their seemingly schizophrenic brother and two much older brothers, one of whom suffers a facial tic -- are gathered, the dark wisps underlying the movie become clearer and a conspiracy forms.

The matriarch has brought them all here to issue her last order to them -- that they each spend 10 minutes alone with a member of the family who remains off-screen despite his significant presence in the film. With this task, they are forced to confront the family’s ostensible burden, though they have actually been experiencing the burden they impose on each other.

Director Lim Tae-gue’s debut feature film, “The Seeds of Violence,” meanwhile, deals with another sort of societal burden: hierarchy and the violence it enforces and is enforced by.

After a complaint of abuse is filed in an Army unit, there is a scramble to find out who the whistleblower is. The fraught tension moves through the ranks, occasionally expressed in intense violent outbursts, all through a single day when the squad is given leave.

Pfc. Lee Joo-yong and Pvt. Shin Phillip -- a foreigner of Korean descent who is the prime suspect of making the complaint -- move into the civilian world while on leave, as Joo-yong tries to force a confession from Phillip. Outside, the violence of the Army is a secret every man they encounter already knows, and something that connects them. It is here the parallels between the institutionalized violence of the Army and that of everyday hierarchy come through.

The film centers on Hee-jung, a young adult working a part-time job in what is presented as “Korea’s suicide capital, Daegu,” saving money with hopes to move to Seoul. Her life takes a complicated twist when a man tries to take his life at her workplace while she is dozing. Still naive and lacking empathy, she is nonetheless pulled into working with a local suicide prevention charity.

Despite its serious topic, “Duck Town” proves a light-hearted drama-comedy on the frustrations of young people in Korea. A building sense of Thanatos lies beneath that drags the characters to the point of wanting to escape their lives by taking them. Yet the film also imbues a sense of trying to grasp at hope wherever it can be found.

Perhaps the cheeriest of the bunch, “Saem” presents protagonist Ma Du-sang and his quest to reconnect with his first love. One major obstacle stands in his way: He suffers from a disorder that prevents him from recognizing faces.

Du-sang takes on a job as a delivery driver in Seoul, where he soon embarks on a kind of Odyssean journey of frustration, injury, grief and confusion. All the while, director Hwang Kyu-il, in his first feature film, also misleads the audience, such that they too can feel Du-sang’s frustration through repeated instances of half- or false recognition.

While “Saem” seems to drag on for too long, the charm of the characters never wears off, as the film comedically delves into identity and the personas thrust onto others that may exist only inside one’s head.

The Jeonju International Film Festival opened Thursday and runs through May 6. The grand prize winner of the Korean Competition will receive a cash prize of 10 million won ($8,820), as will the winner of a prize for directors marking their debut feature. For screening times, visit the festival’s website at eng.jiff.or.kr.