With the country’s economy showing signs of recovery, government policymakers are becoming increasingly negative on the need for additional fiscal spending.

Korea’s gross domestic product increased 0.9 percent from the previous quarter in the January-March period, up from a 0.5 percent on-quarter expansion three months earlier, according to data released by the Bank of Korea on Thursday.

Budget planners, however, may have to work against their will, if presidential front-runner Moon Jae-in wins the election.

Moon, the candidate of the Democratic Party of Korea, pledged last week to extend a supplementary budget worth more than 10 trillion won ($8.86 billion) immediately after he took office to back up his campaign promise to create more jobs.

His main rival Ahn Cheol-soo from the People’s Party has also suggested a supplementary budget might be needed to help boost domestic consumption, which has remained sluggish amid a continuous upturn in the country’s outbound shipments. 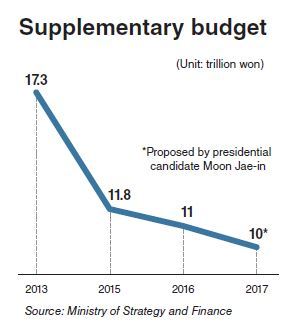 Finance Minister Yoo Il-ho said last week that there would be no need to prepare such extra funds, given economic indicators for the first quarter.

In a meeting with reporters after attending a meeting of Group of 20 finance ministers and central bankers in Washington, Yoo said the Korean economy might grow faster than the government’s estimate of 2.6 percent this year.

Economic organizations and think tanks at home and abroad have recently revised up their 2017 growth outlook for Asia’s fourth-largest economy. The Korea Development Institute, a state-run think tank, and the International Monetary Fund last week upgraded their forecasts to 2.6 percent and 2.7 percent from their previous estimates of 2.4 percent and 2.6 percent, respectively.

The better-than-expected performance of the economy weakens the legal ground for drawing up a supplementary budget.

The current law stipulates specific cases in which an extra budget is permitted -- including a war, natural disaster, economic recession and massive unemployment.

Under the government of former President Park Geun-hye, supplementary budgets were drawn up in 2013, 2015 and 2016 to bolster the sluggish economy, cope with an epidemic disease and drought, and cushion the impact from the British vote to leave the European Union.

It was concerns about a possible deepening of economic slump that made policymakers suggest early this year they would review the need for an extra budget after tracing economic indicators for the first quarter.

“Under the changed circumstance, it may be difficult (for a new government) to push for a supplementary budget,” said a Finance Ministry official, asking not to be named.

Kim Sung-tae, a KDI researcher, also noted there was no reason to draw up an extra budget at the moment as downside risks on the economy were being lessened.

But some commentators say a new government led by Moon would still seek to draw up such a budget.

Moon has pledged to expand fiscal spending during his presidency to prompt what he calls people-oriented growth, which puts priority on creating more jobs, enhancing job security and increasing household income.

Government officials and economists note his push for an extra budget might not fall into any legal category for permitting a supplementary budget in the current situation.

With his party lacking a parliamentary majority, it is also far from guaranteed he would gain support from conservative lawmakers, who remain skeptical about fiscal expansion, in passing an extra budget bill.

Concerns have been raised that Moon’s proposal to drastically increase fiscal expenditure would exacerbate the problem of national debt, which exceeded 1,430 trillion won last year.

Over the past four years since Park took office in early 2013, fiscal deficits rose by between 21 trillion won and 38 trillion won annually as her administration insisted on financing expanded welfare programs without increasing taxes.

Moon said that, if necessary, he would seek to raise taxes based on public consensus, which would prove an elusive task given nearly half of the country’s wage earners and companies are exempt from tax payment under a distorted taxation system.

Economists note Moon should draw a lesson from the fact that the country’s unemployment problem particularly for young people has barely improved, though the amount of the job-related budget increased from 11 trillion won in 2013 to 17.1 trillion won this year. The jobless rate rose from 3.1 percent to 4.2 percent over the cited period, with the figure for youths standing at 11.3 percent in March.

More important than drawing up a supplement budget is accelerating deregulation and structural reforms to make the labor market more flexible and boost the service sector and new growth engines, economists say.