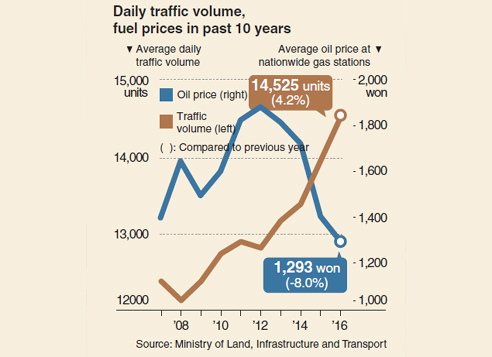 South Korea‘s daily traffic volume increased 17.4 percent from 10 years ago as of last year, the Ministry of Land, Infrastructure and Transport said Tuesday.

The data was collected by counting vehicles passing through select sections on highways and major roads.

Passenger cars accounted for 72.1 percent of the entire traffic volume, followed by cargo vehicles at 25.1 percent. Buses counted for 2.7 percent.

By month, traffic was heaviest in August.

By day, traffic volume remained generally steady from Monday to Thursday before peaking on Friday and Saturday.

The heaviest traffic was recorded between 5 and 6 p.m.