The Bank of Korea’s recent revision of its growth outlook for this year to 2.6 percent from the previous forecast of 2.5 percent bolstered the view that Asia’s fourth-largest economy may be bottoming out to enter the recovery stage.


The central bank’s revised growth projection is on par with forecasts by the Ministry of Strategy and Finance, the International Monetary Fund and the Organization for Economic Cooperation and Development. But it is slightly higher than the 2.4 percent expansion estimated by the Korea Development Institute, a state-run think tank.

The KDI and a couple of local private research institutes are expected to revise up their growth outlook for 2017 in reports on the country’s economic performance to be published this week. 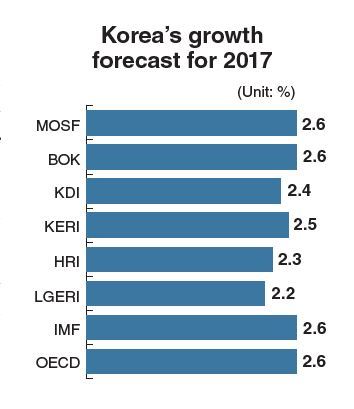 The central bank’s upward adjustment of its growth forecast, the first in three years, came against the background of improvements in exports and facility investment largely thanks to a rise in global trade.

A government report released last week also noted the Korean economy was showing signs of a recovery as exports-led momentum continued to boost production and investment.

The country saw its outbound shipments expand 13.7 percent from a year earlier in March to mark the fifth consecutive monthly increase for the first time since December 2011. Its exports grew 6.1 percent on-year in the first 10 days of this month, latest customs data showed.

On the back of rising exports, Korea’s facility investment is projected to rebound from a 2.3 percent fall last year to a 6.3 percent growth this year, according to the BOK.

It is also encouraging news for the economy that domestic retail sales gained 3.2 percent on-month in February, turning around from a continuous drop over the three preceding months.

According to a survey of 645 local manufacturers, conducted by the Korea Institute for Industrial Economics and Trade last week, the manufacturing sector’s business survey index for sales outlook in the second quarter stood at 105. A BSI reading above 100 means optimists outnumber pessimists.

The survey marked the first time in two years that the index hovered above the benchmark level.

Despite such positive indicators, caution has been raised against the upbeat view that the country’s economy is on track to a full recovery.

“It is not yet the time to paint a rosy picture of the economy,” said Ju Won, an HRI researcher.

He said it needed to be confirmed that a rebound in exports would result in helping boost domestic demand significantly.

Economists note an increase in exports led by large information and technology companies may have a limited impact on reviving the economy.

“The upward revision of growth outlook may just reflect an illusion from a boom in certain industrial sectors,” he said.

The number of manufacturing jobs in Korea dropped by 83,000 from a year earlier last month, keeping a streak of decrease since July last year, whereas the country’s employment rate rose by 0.6 percentage point to 60.2 percent, the highest figure for March in two decades.

The country’s economy will continue to remain exposed to risks from China’s economic retaliation against Seoul’s hosting of a US anti-missile system, trade protectionism pursued by US President Donald Trump’s administration and mounting tensions over North Korea’s nuclear weapons programs.

The BOK forecast China’s retaliatory measures would result in the country’s growth reducing by 0.2 percentage point this year and lead to about 25,000 people losing their jobs.

Korea avoided being designated a currency manipulator in the US Treasury Department’s semiannual report on foreign exchange rate policies last week. But it still needs to step up efforts to reduce its trade surplus with the US to improve the Trump administration’s attitude toward the bilateral economic partnership.

Some analysts say it may be possible for the country’s growth outlook to be further enhanced under the government to be installed following the May 9 presidential election, if geopolitical risks involving the North manage to be contained and an expansive fiscal policy is pursued.

It is also important for the next administration to push through drastic deregulation and reforms of labor and financial sectors in order to shore up the country’s sagging growth potential, they note.