Authored by two professors at the University of Seoul at the request of the committee, the report proposed raising corporate tax rates and eliminating tax breaks for wage earners.

The previous conservative governments led by President Park Geun-hye and her predecessor Lee Myung-bak did not consider a tax increase.

Park, who was ousted from office by the Constitutional Court last month for her involvement in a corruption scandal, insisted on expanding welfare benefits without raising taxes, while Lee, a former construction company CEO, lowered corporate tax rates.

But there is the likelihood that tax burdens will increase under the next administration, following the May 9 presidential election, as most candidates and their parties are more positive toward increasing taxes to finance expanded welfare programs and improve income redistribution.

The report on tax policy indicated that 14.6 percent of Koreans earned less than half of the nation’s median income as of 2012, higher than the 11.25 percent average of the member states of the Organization for Economic Cooperation and Development. On the other hand, Korea’s welfare spending accounted for 10.4 percent of its gross domestic product in 2014, far lower than the OECD average of 21.6 percent.

Eliminating earned income tax credits would increase the revenue by 13.4 trillion won, according to the report.

Many economists disagree with the proposal to raise corporate tax rates, saying the measure would do more harm than good to the economy as it would discourage companies from increasing investment and hiring more workers.

“Raising corporate tax rates goes against the global trend and would result in reducing rather than increasing levies collected from companies,” said Lee Man-woo, a professor of business administration at Korea University. 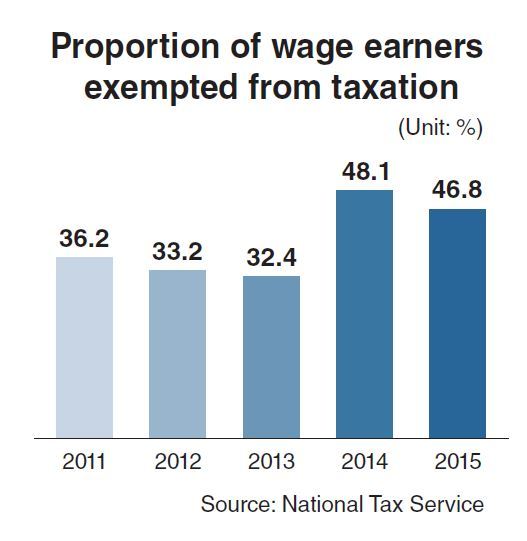 According to research by KPMG International, a global accounting and financial services firm, the average corporate tax rate of 116 surveyed countries dropped from 27.5 percent in 2006 to 23.63 percent last year, with the OECD average also falling from 27.67 percent to 24.85 percent.

Over the cited period, 61 nations, including China, Japan and Germany, cut their corporate tax rates, while only seven countries raised the rates.

During his campaign last year, US President Donald Trump pledged to slash the top marginal corporate tax rate from 35 percent to 15 percent.

Lee said Korea needs to look for ways to increase jobs while refraining from raising corporate tax rates, noting increased employment would result in a growth in revenues and a decrease in demand for welfare benefits.

He suggested expanding tax breaks for corporate investments that would increase employment.

Experts say more attention should be paid to how to widen the country’s tax base.

According to data released by the National Tax Service last week, nearly half of companies and waged workers were exempted from taxation in 2015.

Economists say deregulation and restructuring work should be accelerated to bolster the competitiveness and profitability of small and medium-sized firms, and lessen the excessive share of large businesses in corporate tax revenues.

The top 1 percent and 10 percent of wage earners paid 32.6 percent and 75.9 percent of personal income taxes. This imbalanced structure of taxation put Korea’s income tax to GDP ratio at only 40 percent of those for other advanced countries.

Experts note reducing earned income tax credits and creating a new segment of lower rates are needed to expand the tax base. But they caution against scrapping tax credits for wage earners altogether, which might hurt their will to work and make a significant dent in household disposable income.