So far this year, foreign investors have bought a net of nearly 14 trillion won ($12.6 billion) in Korean financial assets -- 5.9 trillion won in equities and 8 trillion won in bonds, according to data from the Ministry of Strategy and Finance and the Financial Supervisory Service.

This pace of foreign capital inflow is the fastest since the first quarter of 2012, when overseas investors’ net buying of Korean stocks and bonds amounted to 16.2 trillion won as the country emerged as an alternative to eurozone markets hit by a debt crisis.

Given net stock investments by global funds in emerging countries around the world stood at about 6.7 trillion won as of mid-March as estimated by the Korea Center for International Finance, the flow of foreign capital into Korea seemed disproportionately high.

A main factor behind the rising net inflow of foreign capital has been expectations that the value of the Korean won will continue to remain strong against the dollar as US President Donald Trump’s administration is pushing for a massive infrastructure program and deregulation to boost the world’s largest economy. 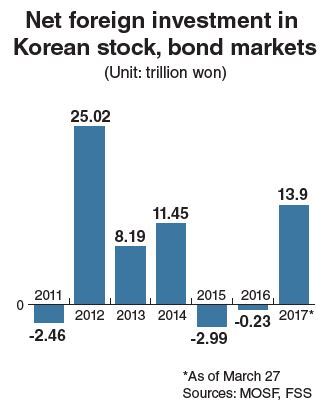 Korea’s rising exports, which have increased for five consecutive months from November, have also contributed to the steep appreciation of the won.

Global rating agencies have kept their grades of the country’s sovereign credit unchanged despite its political turmoil that culminated in the removal of President Park Geun-hye from office last month for her implication in a massive corruption scandal.

What worries economists and market watchers here is that domestic financial markets would be jolted by a sudden reversal of the foreign capital flow down the road, if the Korean economy was hit by adversary events.

Concerns have persisted that the country may be drawn into an economic crisis in April, though government and central bank officials have downplayed such a possibility.

Cited as factors to possibly prompt the rapid outflow of foreign capital in the coming month are the US designation of Korea as a currency manipulator, a disruption in the bailout of an ailing shipbuilder and North Korea’s nuclear and missile tests.

Finance Minister Yoo Il-ho and Bank of Korea Gov. Lee Ju-yeol have repeatedly said there is little chance of the US designating Korea a currency manipulator as the country remains short of meeting all requirements for designation.

Financial authorities also note a failure to work out a rescue plan for the Daewoo Shipbuilding and Marine Engineering based on self-restructuring would have a limited impact on its lenders and the North’s provocations in recent years have barely frightened investors in Korea’s equity and bond markets.

“It still needs to be taken seriously that the heavy inflow of foreign capital betting on the appreciation of the won could amplify volatility in local financial markets,” said Cho Seong-hoon, an economics professor at Yonsei University.

More than half of net foreign investment in Korea’s stock markets so far this year has come from tax havens across the globe, compared with 42 percent for the whole of last year. Capital from those areas tends to be speculative and invested on a short-term basis, responding sensitively to negative news.

A possible reversal of interest rates between Korea and the US could prompt capital flight out of local financial markets.

The US Federal Reserve has signaled it would make rate hikes twice more within the year following a 0.25 percentage point increase last month to a range between 0.75 and 1 percent.

The Bank of Korea has kept its key rate at a record low of 1.25 percent since June.

BOK policymakers have suggested Korea’s monetary policy may not move in sync with US rate increases if macroeconomic conditions and outlooks in the two economies remain different.

In a report submitted to the National Assembly on Thursday, the central bank vowed to maintain the current monetary easing policy to prop up the sluggish economy.

But economists have called on monetary policymakers to consider gradually raising rates to prevent a possible capital flight while avoiding hampering economic recovery.

They also note efforts should be stepped up to prevent the country from being designated a currency manipulator by reducing its trade surplus with the US and widening mutual understanding with authorities in Washington.