Household power consumption remained almost the same for the first two months in 2017 from a year earlier despite the government lowering electricity rates in December, data showed Monday.

The government reduced household electricity bills by about 11 percent in December by changing the six-tier cumulative residential electricity price system to a three-tier one to ease the financial burden on households. 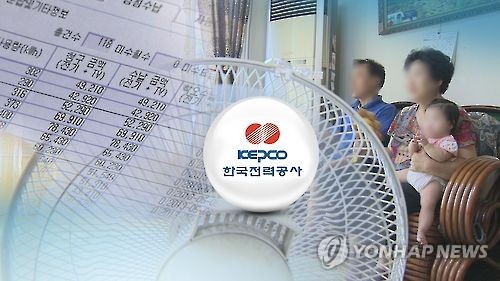 On-year household power consumption declined 0.7 percent to 5,602 gigawatts in December, while the comparable figure for January rose 0.5 percent to 5,989 GW, according to the data by the Korea Electric Power Corp.

The latest statistics disproved concerns that any electricity cuts may cause a power shortage due to a rapid increase in household power consumption.

KEPCO says the modest amount of electricity use for December and January might have been affected by the mild weather.

The average temperature was 3.1 C in December and 0.1 C in January, while the comparable figures were 1.5 C and minus 1.0 C a year earlier.

The greatest daily power consumption was made on Jan. 23, with 83.66 million kilowatts, as the daily average temperature fell to minus 8.9 C, the coldest day this winter.

Last year, the biggest amount of power consumption was made on Jan. 21, with 82.97 million kW.

"We are trying to predict the power consumption in an accurate manner for the coming summer for effective management of the power supply," an official of the Ministry of Trade, Industry and Energy said.

Power consumption usually hits peak levels in summer due to the use of air conditioners.