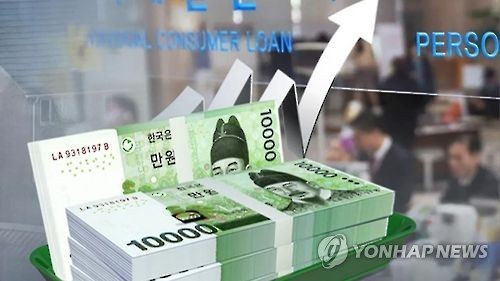 According to Statistics Korea, the monthly income of a household here with two family members or more averaged 4.4 million won ($3,884) last year, up only 0.6 percent from 2015.

It's the lowest growth since related data were first compiled in 2003.

Their real income, inflation adjusted, was off 0.4 percent.

Consumers continued to tighten their belts. Household spending dropped 0.5 percent on-year, the first time that it posted a decline since 2003.

The job market condition also worsened to the level of 1999, when the country's economy was hard hit by a foreign exchange crisis. The jobless rate added 0.1 percentage point on-year to 5 percent in February. It marks the highest for February since 2001.

Outstanding household debt jumped by 141.2 trillion won to 1,344.3 trillion won over the year, equal to 91.6 percent of the nation's gross domestic product.

The ratio climbed 4.6 percentage points from 87 percent recorded in 2015, data by the Bank for International Settlements showed.

It's far higher than 79.4 percent in the US, 58.7 percent in the eurozone and 62.2 percent reported for Japan, although there might be some difference among the countries in the way related data is compiled.

Another problem is that borrowing cost is in the upward trend, with the US raising its own policy rate.

The Bank of Korea estimates that if interest rates on loans climb 1 percentage point, borrowers will face 9 trillion won in additional debt burden.

The share of households in the gross national income dipped to 62 percent from 69.3 percent in 1997, while that of the corporate sector expanded from 16.7 percent to 24.6 percent.

Local conglomerates hold around 700 trillion won in surplus funds. The BOK said the corporate debt ratio shrank to 75.9 percent in June last year from 88.3 percent in 2012.

"South Korea's economy based on excessive dependence on export firms has already reached a limit," You Jong-il, a professor at the Korea Development Institute, said. "It's time to revitalize the economy through domestic spending."

Sung Tae-yoon, professor of Yonsei University, pointed out the government seems to be "tightening fiscal spending" even though state tax income has actually grown.

"An economic recovery via fiscal spending is necessary," he added. "The government should strengthen the social safety net and support job creation in the civilian sector, not the public one." (Yonhap)