South Korean stocks closed slightly lower on Wednesday, slipping from their almost two-year highs the previous session, as investors opted to lock in part of recent gains ahead of the outcome of the Federal Reserve's rate policy meeting. The Korean won rose to the US dollar. 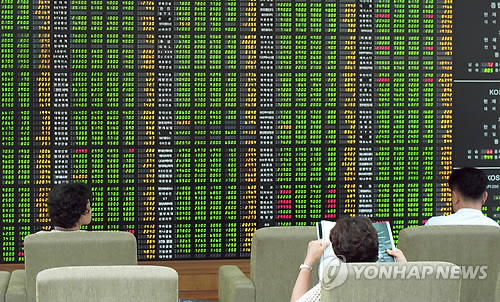 The local stock market opened a tad lower as investors cashed in recent gains and took to the sidelines ahead of the outcome of the Fed's announcement on its rate policy.

The KOSPI has been on a steady rise as foreign investors continued to scoop up local stocks, extending their buying binge to an eighth consecutive day following eased political chaos in Asia's fourth-largest economy and sound economic data.

Park was impeached by parliament on Dec. 9 on allegations she let a close friend meddle in state affairs, colluding with her to extort money from conglomerates and others.

"A slide in oil prices have led to a fall in the US stock market, and investors remained cautious as the Fed is set to announce its rate decision," said Lee Kyong-min, an analyst at Daishin Securities.

Foreign investors snatched up a net 121 billion won worth of local stocks, extending their buying streak to an eighth day, while institutional investors offloaded a net 259 billion won.

But other affiliates declined following a surge a day before.

On Tuesday, they soared on news that the nation's largest business group remains firm in pushing for a plan to transition to a holding company structure, regardless of the leadership vacuum caused by the detention of its de facto chief, Lee Jae-yong.

LG Electronics, a major home appliance maker, was 1.04 percent higher at 67,800 won on hopes that its latest high-end smartphone, the G6, will sell more than expected.

The local currency closed at 1,143.60 won against the US dollar, up 5.2 won from the previous session's close.