By Korea Herald
Published : Mar 7, 2017 - 17:45       Updated : Mar 7, 2017 - 17:45
Businesses, experts and government representatives from around the world will gather to discuss the future of electric vehicles on the South Korean resort island of Jeju next week amid lingering questions on infrastructure and the dominance of fossil fuel-powered cars.

The fourth International Electric Vehicle Expo, an annual exhibition, kicks off on March 17 for a six-day run at Yeomiji Botanic Garden of Jungmun Resort in Jeju, organizers said Tuesday. 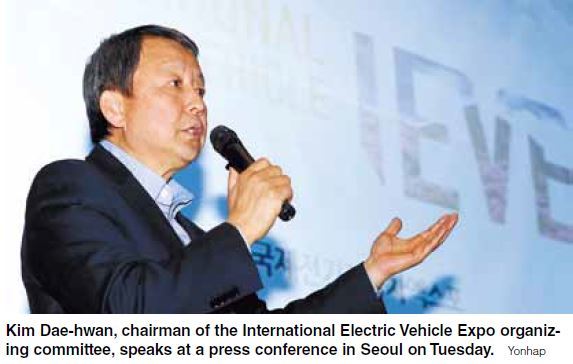 The annual exhibition is the world’s first and only event on pure EVs, their components, technologies and infrastructure. A total of 155 companies including carmakers and parts makers are expected to participate in the event to discuss the future of EVs and the “eco-revolution,” said Kim Dae-hwan the chairman of the event’s committee.

“This year will see the rise of the second-generation EVs that have driving ranges of more than 380 kilometers per charge. And they will lead the formation of the EV mass market,” he said.

The expo will be the debut stage for GM Korea’s latest EV compact Bolt, while Renault Samsung, a local branch of the French automaker, plans to display the SM3 and Twizy, a battery-powered two-seater electric city car.

The nation’s largest carmaker Hyundai Motor will also participate in the event to highlight an upgraded version of the Ioniq with a longer driving range and improved mobility.

Battery makers and electricity companies including Samsung SDI and Korea Electricity Power Corp. will also participate in the event.

The committee, however, raised concerns over the impact of retaliatory actions by China in protest against South Korea’s decision to install a US anti-missile system on the peninsula. The expo is sponsored by the ministries of commerce and environment as well as the self-governing provincial government of Jeju.

“Many Chinese businesses that had planned to display (their products) have canceled participation amid the THAAD row,” said Kim. “We may face difficulties (over THAAD) but talks on the business sector will be carried out separately.”

To promote network building among parts makers, business representatives from China are set to sign a memorandum of understanding with their counterparts in South Korea on the sidelines of the expo, he said.

William Li, the founder and chairman of NextEV, dubbed as the Chinese version of US EV giant Tesla, is set to deliver a keynote speech at the opening ceremony of the expo.

The annual event also promotes Jeju as an ideal testbed market for EVs.

The self-governing province plans to become a carbon-free island by 2030 with vehicles all operated by electric batteries. Jeju has an electric vehicle charging station in every 3.5 square kilometers, with full policy support. Jeju Gov. Won Hee-ryong is known to be an enthusiastic EV driver.