Some economic watchers have cautioned that Asia’s fourth-largest economy may fall into trouble, probably in April, when the US might designate it a currency manipulator and a large amount of debt falls due for a faltering shipbuilder.

These factors would be added to a continuous decline in domestic consumption to push the sluggish economy over the cliff, they say.

Finance Minister Yoo Il-ho, who doubles as deputy prime minister for economic affairs, said Friday such concerns were excessive, emphasizing the Korean economy is strong enough to go through a possible crisis.

A day earlier, Bank of Korea Gov. Lee Ju-yeol downplayed talks of the April crisis, though he cautioned against external and internal downside risks such as rising trade protectionism and mounting household debt.

Talks of a possible economic crisis in Korea have been stoked on and off in recent years, with financial authorities here suspecting speculative forces have tried to fuel them to gain short-term interests.

The rumor of the April crisis comes with an argument the country is facing an economic crisis that has repeated on a 10-year cycle following the 1997 foreign exchange crisis and the 2008 global financial turbulence.

As policymakers here indicate, the Korean economy now has far stronger fundamentals than before in terms of external payments capability. 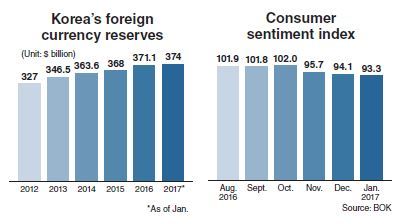 Policymakers have tried to lessen the possibility of the country being labeled a currency manipulator, which would result in a rise in the value of the Korean won against the dollar, weakening the price competitiveness of Korean exporters.

“The designation as a manipulator, however, could lower the possibility of capital flight from the country,” said a Finance Ministry official, speaking on condition of anonymity.

But deteriorating domestic economic conditions make it difficult to dismiss the latest concern about the economy as yet another habitual one.

The average household consumption propensity, or the ratio of consumption expenditure to disposable income, dropped 0.9 percentage point from a year earlier to a record low of 71.1 percent last year.

The consumer sentiment index came to 93.3 in January, the lowest since the 2008 global financial crisis, central bank data showed, suggesting private consumption will continue to weaken in the coming months.

Real household income fell 0.4 percent from a year earlier in 2016, marking the first on-year decline in seven years. The poorest 20 percent of households, which have a higher propensity to consume, saw their income drop 5.6 percent while earnings of the richest 20 percent increased 2.1 percent.

The number of marginal households, whose debt-to-disposable income ratio exceeds 40 percent, reached 1.81 million last year, up 14.7 percent from 1.58 million recorded in 2015, according to a report from the National Assembly speaker’s policy office.

Economists worry that the steep decline in private consumption, which accounts for about half of the country’s gross domestic product, will offset the positive effect of a rebound in exports and drag the economy into a low-growth rut.

Policymakers acknowledge that the country’s economy, which grew 2.7 percent last year, may miss this year’s target of 2.6 percent.

The government last week announced a set of measures to boost private consumption, including the designation of a family day once a month to encourage workers to leave work earlier and have more time to go shopping and travel with family members.

But experts say the package seems unlikely to be effective unless accompanied by an increase in household income and consumers’ confidence in the future of the economy.

“A repeated suggestion of short-term measures put together hurriedly may only make people feel fed up with,” said Kim Sung-tae, a researcher at the Korea Development Institute, calling for fundamental efforts to accelerate labor reform and deregulation to increase jobs and boost growth.