At 2:20 p.m., the Samsung heir-apparent, wearing a black suit, white shirt and a prison number on his left chest, arrived at the special prosecution team’s office by police van. With a stern facial expression, Lee, his hands tied together with rope, did not answer any questions asked by reporters at the scene.

“The investigation will focus on some unsatisfactory parts regarding the demonstration of detailed facts,” a spokesperson for the special prosecution team said. 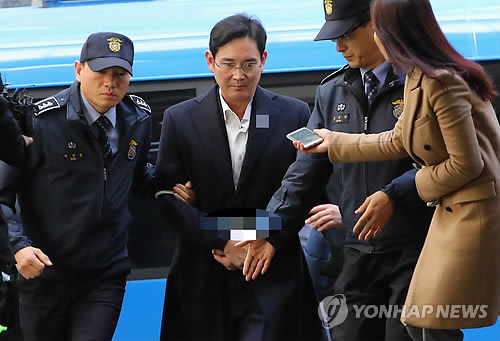 The team said it had secured evidence that Samsung vowed to give 43 billion won ($37 million) to Choi in return for the government’s support for Lee’s hereditary succession.

The government benefits given to Samsung include a reduction in the fair trade commission’s order for Samsung SDI to sell shares in Samsung C&T, in which the initial order to sell 10 million shares was halved, and a rule change by the Korea Exchange to help Samsung BioLogics go public.

Lee is expected to be charged before Feb. 28, when the special prosecutor’s investigation is due to end.