The change has drawn a mixed reaction among those in the food and beverage industry, with some anticipating the young leaders will take initiative in coming up with new business models and improving the group’s structure. Others criticize the sons’ unusually fast promotion without due assessment of their business capacities.

Hur Hee-soo, 39, grandson of the late SPC Group founder Hur Chang-sung, was the head of the marketing strategy division and the leading manager responsible for introducing Shake Shack to South Korea. Many in the industry claim it was the success of Shake Shack that led to his promotion as vice president last November. He is said to still be overseeing the marketing strategy division. 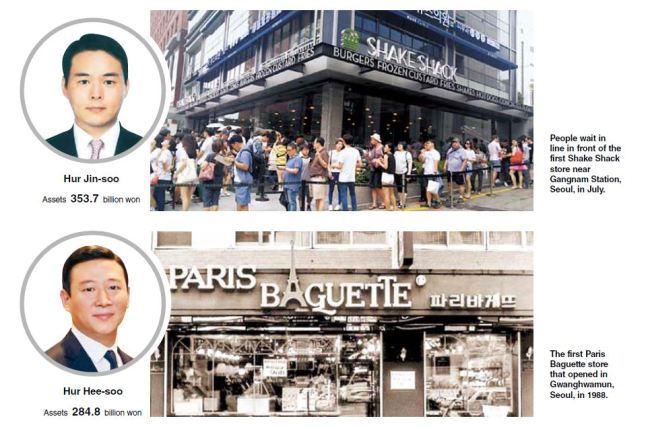 In November 2015, the eldest son, Hur Jin-soo, 40, who was the executive director of Paris Croissant was promoted to vice president. He is currently in charge of the group’s product development and overseas business.

The Hur brothers -- like the other third generation members of chaebol families -- entered the group in their late 20s, after graduating from university. They became vice presidents within a span of 10 years.

Hur Jin-soo graduated from Yonsei University with a major in biochemistry and entered Paris Croissant in 2005. He also served as the head of the strategy planning division and general director of Innovation Lab. He completed the regular course at the America Institute of Baking, following his father’s footsteps. Hur Hee-soo joined Paris Croissant Co. in 2007.

The recent introduction of Shake Shack in Korea was an ambitious plan by SPC to diversify the food services industry.

Shake Shack is a hamburger chain established by Danny Meyer, the CEO of food services company Union Square Hospitality Group, to collect funds for the restoration of New York Maddison Square Park in 2001. Shake Shack started off selling handmade burgers in food trucks at the park.

The popularity of Shake Shack allowed the company to open its first store in Maddison Square Park. It gained the reputation of selling burgers made of premium ingredients and became one of America’s top three burger chains along with In-N-Out and Five Guys. In January 2015, the company was listed on the New York Stock Market, and the worth of Meyer’s assets jumped to $400 million.

The SPC group signed a contract with Shake Shack International in December 2015 for its exclusive license in Korea. It plans to open 25 stores directly managed by the company headquarters across the country by 2025.

The introduction of Shake Shack here was a great success. On the opening day of the first store near Gangnam Station in Seoul last July, hundreds of people lined up. The second store opened in Cheongdam-dong, Seoul, in December.

SPC started out as Sangmidang, a bakery in Ongjin, Hwanghae Province, set up in 1945 by the late Hur Chang-sung, the founder of Samlip General Food. Later, he moved the store to Seoul and established Samlip General Food upon the success of its signature cream bread.

It is a well-known story that he moved to the US in 1981 at the age of 33 to further his passion for bakery by studying at the America Institute of Bakery for 1 1/2 years.

Even now, he tastes samples of the company’s new products and is the final decision maker when it comes to their launches. He was also the inspiration of the main character of the TV series “Bread, love and Dreams” (also known as “King of Baking, Kim Tak-gu”), which aired in 2010.

Hur Young-in is one of the richest individuals here who is an owner of unlisted companies.

Currently, the largest shareholder of SPC Group’s only listed company Samlip General Food is the unlisted company Paris Croissant with 40.66 percent of shares.

Paris Croissant is the actual holding company of SPC Group, and the Hur family owns 100 percent of its shares. Hur Young-in owns a 63.5 percent share of Paris Croissant, which is worth at least 600 billion won when standardized by total ownership interest. He also owns shares of Shany (9.8 percent) and Sungil Chemical (70 percent), and 100 percent of shares in SPC Capital, Mildawon, SPL and SPC Networks.

Hur Jin-soo and Hur Hee-soo are the only children of Hur Young-in and his wife, Lee Mi-hyang, who is the younger sister of Kolon Group’s Honorary Chairman Lee Dong-chan, and the youngest aunt of the current Chairman Lee Woong-yeul.

By The Superrich Team