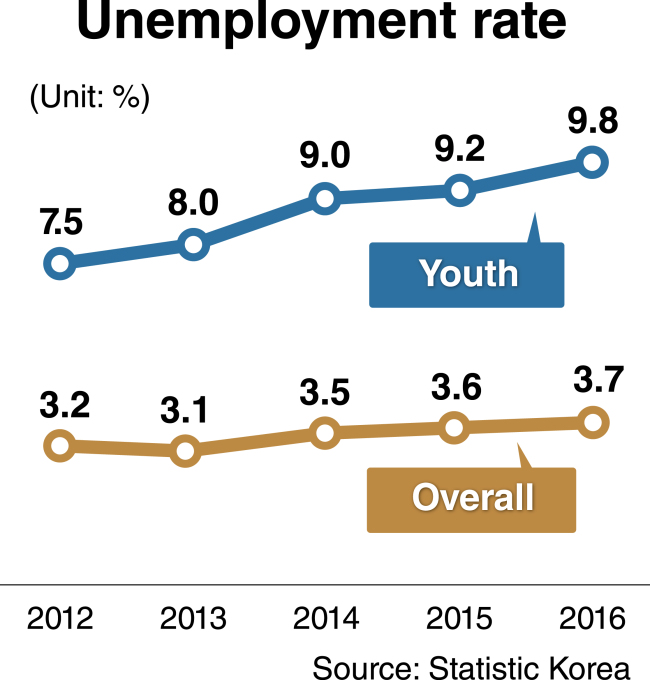 The number of unemployed people in 2016 was officially tallied at 1.01 million, but the real number, which includes those who are preparing to apply for jobs or work part time, was 4.5 times higher, according to Statistics Korea on Monday.

The government plans to hire 62,000 workers in the public sector this year, about half of whom will be employed in the first half of the year. 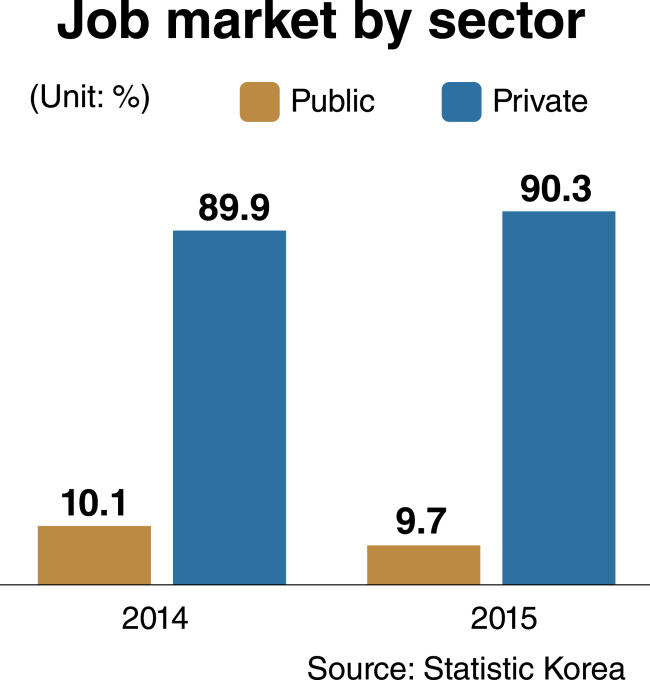 Moon Jae-in, an opposition presidential candidate, last week pledged to create 1.31 million jobs, 810,000 of them in the public sector, if he wins the election to select a successor to President Park Geun-hye.

Former UN Secretary-General Ban Ki-moon is also said to be working on pledges to create more jobs in the public sector.

Experts said, however, broader and more substantial measures are required -- beyond tapping into the public sector -- to ease the country’s unemployment problem, which is expected to deteriorate, as the economy is in a low-growth rut and corporate restructuring is causing massive lay-offs.

The public sector accounts for less than 10 percent of total jobs in the country, according to data from the national statistics office.

Moon noted the figure was far below the average of 21.3 percent for the 34 member states of the Organization for Economic Cooperation and Development. He promised to increase the number of firefighters, police officers, teachers, social-welfare workers and other public sector employees.

But he stopped short of suggesting credible ways to fund his employment plan.

“Increasing public sector jobs may have a short-term effect, but it cannot be a fundamental solution,” said Kim Dong-won, a professor of business administration at Korea University in Seoul.

It is desirable for jobs to increase as a result of increased investment in the private sector, he said, calling for strengthened efforts to encourage corporations to expand investment by accelerating deregulation and offering tax incentives.

With factory output affected by weak domestic demand and declining exports, the number of employees in Korea’s manufacturing sector decreased by 5,000 from a year earlier to 4.48 million last year, marking the first negative growth since 2009.

Potential presidential candidates have barely mentioned how to create more jobs in the private sector. The only suggestion made by Moon regarding this was that it might be possible to employ 500,000 additional workers by adhering to the law that limits working hours to 52 hours a week.

Moon and other presidential hopefuls have put more emphasis on restraining corporate activities to pander to anti-business public sentiment than encouraging companies to increase investment.

Opposition parties have blocked the passage of bills aimed at reforming the labor market and removing complex regulations, while pushing to raise corporate tax rates.

There may be a need to toughen measures to curb the dominant influence of large corporations and sever the lingering collusive links between politics and business, which was put in the spotlight again in the wake of the influence-peddling scandal that has ensnared President Park.

Experts still indicate these efforts need to be made in a more measured way so as not to sap corporate activities and hamper job creation.

Oh Jung-geun, a professor of economics at Konkuk University in Seoul, urged political circles to speed up deregulation to help create jobs, particularly in service sectors, saying it was basically the role of companies to provide quality jobs.

Experts said it is important to draw up a long-term road map to create conditions that induce companies to voluntarily increase employment.

In this regard, a recent decision to establish a new post in charge of job creation at each and every government agency has invited criticism as yet another form of regulation.

“I myself would be at a loss as to what to do if I were assigned to the post,” said an official at an economic ministry, asking not to be named.

In a meeting last week, Labor Minister Lee Ki-kweon asked top executives of the country’s 30 largest conglomerates to employ more young people in the first half of the year, but this was met with a lukewarm and cynical response.