[Superrich] Korea’s Richest 100 born in the year of chicken 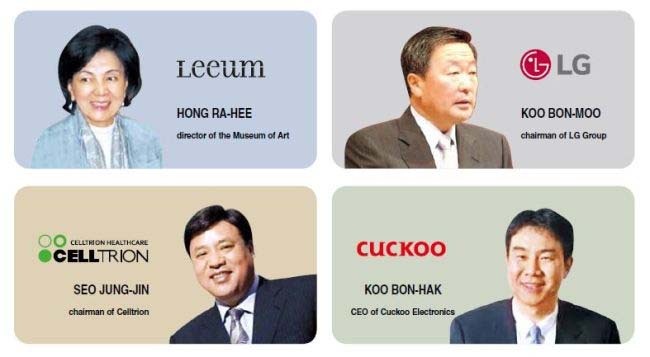 Among the four is Hong Ra-hee, 72, who is the director of the Museum of Art. She has the largest amount of assets out of the four.

Hong’s stock assets as of Dec. 30 were almost 2 trillion won ($1.7 billion). According to the Financial Supervisory Service, Hong owns around 1.1 million shares (0.77 percent) in Samsung Electronics’ common stock. In terms of her asset scale, she ranks eleventh nationwide and is the first among females. Her eldest daughter, Lee Boo-jin (14th) and second daughter Lee Seo-hyun (15th) followed suit. Hong also owns some real estate, such as the house in Gahoe-dong and the building in Hannam-dong.

On Jan. 2, Koo revealed the group’s objectives during the New Year’s gathering that was held at LG’s main headquarters in Yeouido. He said, “In the age of changes we need to grasp hold of opportunities of development and overcome challenges to create a basis for sustainability,” and emphasized the need to join the wave of the fourth industrial revolution.

However, the LG group is facing difficult challenges this year. The group needs to overcome the slump in its smartphone business through the automobile electronics market under the lead of LG Electronics and LG Chem.

The next business leader also born in the year of the chicken is Seo Jung-jin, 60, chairman of pharmaceutical company Celltrion. He has transformed Celltrion into a firm with aggregate market value of over 5 trillion won since its establishment in 2002. Seo jumped into the bio industry solely relying on the belief that “the bio industry is on the rise” after losing his job during the IMF crisis. The year 2002 was when the early markets of the biosimilar -- generic drugs -- industry was being formed.

Seo’s stock asset including Celltrion Holdings, Celltrion GSC, and Celltrion Healthcare accounts to 870 billion won. Among the “Korea’s Richest 100,” he ranks 36th. Seo is also one of the renowned self-made rich men of Korea.

Celltrion started to sell the biosimilar for rheumatoid arthritis Remsima through the global pharmaceutical company, Pfizer Inc., last November. Also, Truxima, a biosimilar of anticancer drug for hematologic malignancy, has entered the exports market which led to higher expectations on Celltrion’s performance this year.

Born in 1969, Koo Bon-hak, 48, is the CEO of Cuckoo Electronics who has also made it on the list of “Korea’s Richest 100” born in the year of the chicken. Koo is the eldest son of the founder of Cuckoo Electronics, Koo Ja-sin, and is a distant relative of LG Group’s honorary chairman.

Koo owns 3.2 million shares (33.1 percent) of Cuckoo Electronics’ common share, and 418.7 billion won worth of assets. Koo entered the company while his father, former CEO Koo Ja-sin, was managing the firm, and played a significant role in coming up with the company’s own rice cooker brand Cuckoo. Since then, Cuckoo was able to maintain its position as No. 1 in the market share of electric rice cookers, and was listed on the Kospi in 2014.

Cuckoo Electronics is expanding its stable source of income, the rice cooker and rental industry, oversees. It is also diversifying its business to electronic microwaves and air purifiers.