“Dangerous Outside the Blanket” is a mobile simulation game that puts players in everyday situations and is based on a survival and cultivation system.

The game prompts players to choose specific actions in response to situations that arise in various aspects of everyday life (e.g., going to work, office duties, routine after getting home from work). In the game, however, these actions result in the players’ characters either living or dying in absurd yet hilarious scenarios, making the game very popular. 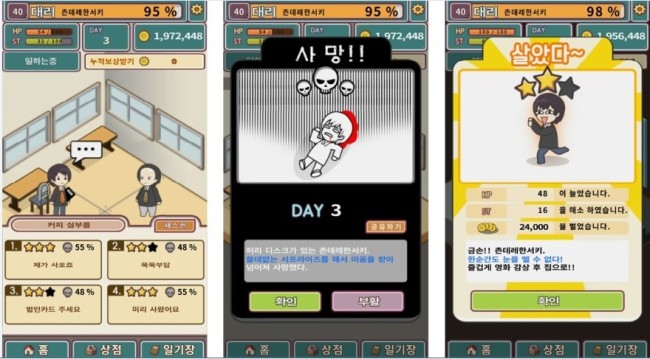 With the recent update, it has become easier and more convenient for players to manage their progress in the game. For example, before making a decision on a given scenario, the player can see the death probability of that decision as well as the grade that can be earned if the player’s character makes it through the day in one piece.

The in-game money earned in this way can be used to satisfy the characters’ various needs and players’ desires, including paying promotion exam fees or using the “housing system,” which enables players to decorate everyday spaces (e.g., subway trains, buses, offices, and movie theaters) — this adds a whole new dimension of fun to the game.

CEO Serky Jeong said, “We will soon introduce a system that allows users to share the results of their life-and-death decisions via social media channels such as Facebook.”

LuDuS501 is currently working hard to expand its presence in the domestic market while also seeking ways to enter foreign markets.

“We are looking into expanding into Japan through localization activities,” Jeong said. “To make this possible, we are participating in major overseas game shows and fully dedicating ourselves to promotional and marketing activities.” The company’s efforts are being funded by the Gyeonggi Center for Creative Economy & Innovation.

Having received numerous awards, including Content Korea Lab’s Game Award and the Korea Mobile App Award, for its mobile game “Golftrix” (released in 2015), LuDuS501 has already been acknowledged for its mobile game development abilities. It is now building on that success with its release of “Dangerous Outside the Blanket,” securing its reputation as an innovative game studio that creates differentiated systems.