The Kia Tigers in the Korea Baseball Organization (KBO) said Thursday they signed Choi to a four-year deal worth 10 billion won -- 6 billion won in total salary and a 4 billion won signing bonus. 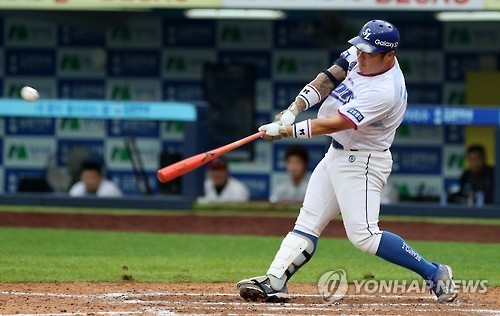 This is the largest free agent contract signed in the KBO. Choi surpasses Park Sok-min who inked to a four-year deal worth 8.6 billion won with a 1 billion won option in 2015.

The 32-year-old is a three-time Golden Glove winner. He first joined the Lions as catcher in 2002, but was released after 2005.

After finishing his military duty, Choi re-joined the Lions in

2008 as outfielder and then went on to win the Rookie of the Year award in the same year.

Choi enjoyed his most productive season to date in 2016, winning his first batting title with a .376 average and his second RBI crown with 144 in 138 games this season for the Lions.

The left fielder belted 31 home runs for his third straight 30-homer season while leading the league with 195 hits, 46 doubles,

Choi said he is ready for his new career with the Tigers.

"It's a big honor to receive 10 billion won, but I also feel pressure," he said. "I want to thank the Kia Tigers officials who evaluated me."

Choi was born in Jeonju, a city in North Jeolla Province that is 100 kilometers north of the Tigers' hometown of Gwangju. The slugger, who throws right and hits left, said he will become the first player in the KBO to earn a .300 batting average, 30 home runs, and 100 RBIs for four straight seasons.

"I always wanted to play for the Kia Tigers one day," he said.

100 RBIs record, but if I can achieve that with the Tigers, it will be great. I will do my best to accomplish that record." (Yonhap)