Park to deliver another address over confidante scandal

President Park Geun-hye will deliver another address to the nation Friday over a burgeoning corruption scandal involving her longtime confidante, the presidential office said.

The address will come 10 days after Park made a rare apology over presidential speeches leaked to Choi Soon-sil who is at the center of the scandal that has plunged the incumbent chief executive into the greatest crisis of her political career.

The president is expected to make her address at 10:30 a.m., a source said. 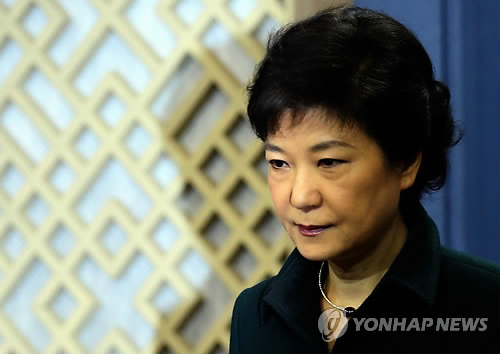 Multiple ruling party sources said that Park is considering making another apology over the scandal and possibly expressing her willingness to accept a probe.

In her possible address, she is also expected to outline her plan to delegate her executive power related to economic and social affairs to her prime minister-designate and focus on external affairs such as security and foreign policy.

To salvage her troubled presidency and allay escalating public anger over the scandal, Park has made a series of personnel changes since Sunday.

On Wednesday, the president tapped Kim Byong-joon, former policy advisor to late liberal President Roh Moo-hyun, to be the new prime minister, and also picked new ministers of finance and public security based on Kim's recommendations.

Park has replaced her chief of staff and three of her 10 senior secretaries.

But such moves have failed to quell calls for her resignation.

Many citizens across the nation, including university students, professors and some opposition lawmakers, have demanded that Park step aside.

The scandal gripping the country revolves around Choi Soon-sil, whom critics portray as the "eminence grise" of the Park administration.

Choi is alleged to have used her decades-long ties to the president to meddle in state affairs, particularly presidential matters such as revising public speeches and even the selection of some presidential secretaries.

The 60-year-old woman is also suspected of having peddled undue influence in the creation and operation of two nonprofit foundations dedicated to promoting Korean culture and sports. She is being investigated to see if she misappropriated money from the foundations. (Yonhap)