[The Palate] The art of steam cooking, seiro-mushi style 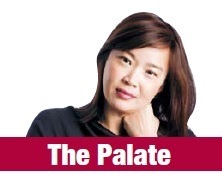 The health benefits of steamed food are boundless. The steam cooking method is a popular style in which many health food practitioners enjoy the maximum nutrition of the food they cook.

The absence of any flavoring or cooking agitators, such as oil or salt creates, a dish prepared in a true purist style. Steaming food through vaporized water contained within the cooking vessel results in a clean tasting and healthy meal that can be enjoyed by even the most pretentious eaters.

Seiro-mushi, the Japanese method of steam cooking in which food is steamed on bamboo trays tableside, is one of the easiest techniques and what goes inside the steamer is just as important as the art of cooking itself.

Umm restaurant in Nonhyeon-dong, Gangnam-gu, Seoul is a quaint and quiet space off the main drag of Dosan-daero. Not as well-known as the izakayas and kappos in the area, Umm specializes in seiro-mushi table cooking, which is a delightful offering as minimal cuisine is often hard to find in the Korean interpretation of Japanese food in Seoul.

The stark white facade of the restaurant is alluring, emanating a warm yellow glow from inside through its minimal black paned windows, setting the tone for a calming meal ahead. Everything about eating out in Seoul seems frantic, even in the most calming of spaces, but what Umm achieves as soon as you enter the space is an almost zen-like ambience in a chic but inviting way. It is as if the restaurant sound proofs itself from the city when the door closes.

As it is well known, foreign food in Korea can be costly, whether you are paying for the price of the imported ingredients or the lack of authentic efforts by local chefs trying their best to bring global food to the city.

Aside from the high-end Japanese restaurants in the top hotels, true Japanese cuisine without too much manipulation is hard to come by, as the characteristic subtle flavors of its food becomes bolder here, mimicking the aggressive flavors of Korean cuisine. So coming across a restaurant such as Umm that brings the perfect balance of Japanese style cooking with Korean ingredients, enjoyed in a beautiful down to earth setting along with a healthfully delicious menu, it’s surprising why Umm has stayed under the radar for so long.

Seiro-mushi at Umm consists of two stacked bamboo steamers specially imported from Japan. The bottom tray consists of an array of organic vegetables such as bok choy, mushrooms, root vegetables, and konnyaku. The top steamer tray is a beautiful display of a thinly sliced trio of meats, chadolbaegi beef brisket, Grade A castrated hanwoo beef, and Korean pork butt.

The trays are steamed on the tabletop for 12 minutes and then laid out to enjoy with two complementing sauces similar to those of shabu-shabu -- one being a rich nutty sesame sauce and the other a refreshing soy ponzu. Each bite of meat exudes the juiciness of its simplicity and quality. The fresh vegetables are perfectly cooked through and one feels the cleanliness and healthfulness of the complete meal throughout.

Delicate cooking with the best ingredients in a serene and cozy setting, Umm restaurant is everything you can ask for in a restaurant this fall.