By 박한나
Published : Oct 12, 2016 - 18:34       Updated : Oct 12, 2016 - 18:34
[THE INVESTOR] Daewoo Shipbuilding and Marine Engineering, South Korea’s second-largest shipyard, has rejected a draft assessment report by McKinsey Korea that will be a guideline to the government’s restructuring scheme for the nation's embattled shipbuilders overall.

“After thoroughly reviewing McKinsey’s draft, we expressed the view that we cannot accept the recommendations made to Korea Offshore & Shipbuilding Association as the report did not reflect Daewoo Shipbuilding’s future strategy and self-rescue plans,” DSME said in an emailed press release on Oct. 12. 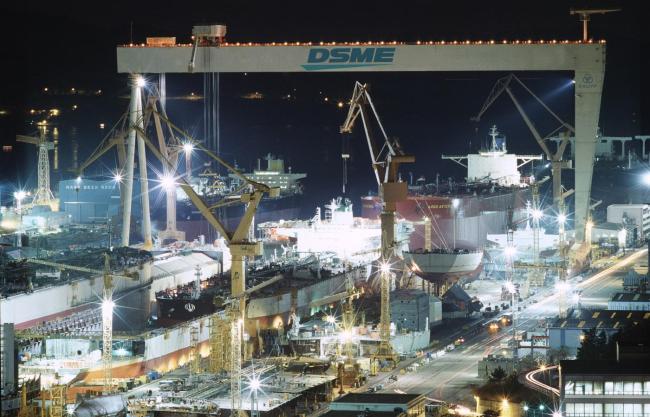 The assessment, commissioned by Korea Offshore & Shipbuilding Association, reportedly said that DSME will not be able to stay afloat as it will face a liquidity shortage of 3.3 trillion won (US$2.93 billion) by 2020.

Given that DSME has the most shaky financial structure and has no parent company to provide financial aid, the company will face the biggest challenge to tide over the crisis among other domestic peers like Hyundai Heavy Industries and Samsung Heavy Industries, the consulting firm said in the report, according to local media outlets.

A spokesman of DSME said HHI and Samsung Heavy -- also have raised issues over some misleading content of the analysis.

Based on the final version of the consulting report to be published by the end of this month, the South Korean government is expected to announce a revamp plan on the domestic shipbuilders and shippers which have been struggling in the wake of the 2008 financial crisis and the drop in global trade.

The shipbuilder criticized that the report as “groundless” and “irrational.”

“McKinsey’s report is based on the assumption that the company’s performance including sales and operating margin during the past five years will be repeating in the next five years and the size of the business will continue to shrink with deteriorating market conditions,” DSME said.

Despite the DSME’s discontent, McKinsey is expected to submit the study report as early as this week to the Ministry of Trade, Industry and Energy which will unveil a set of restructuring measures aimed at improving the competitiveness of the troubled industries.

“There will be no change in the government’s plan to announce the scheme within October. Therefore, McKinsey’s consulting result should be handed in this week or next as we need time to discuss the issue with other related ministries,” an official at the Trade Ministry told The Investor.

Meanwhile, DSME said on Oct. 12 that it will speed up its restructuring process by shedding 3,000 of jobs by the end of this year, advancing its layoff schedule as its order book has been shrinking faster than expected this year and its expiry dates of corporate debt come near.