According to the survey, released Tuesday by the Seoul Credit Guarantee Foundation, 15.6 percent of the small corporations and micro-enterprise owners polled said that their businesses would be affected by the law, with 70.2 percent of them forecasting a grim outlook.

By industry, accommodation and restaurants had the highest number of respondents anticipating an impact on sales, with 27.9 percent of them saying so. Over 80 percent of them predicted a decline.

This was followed by 17.4 percent of respondents in the technology services industry expecting a change in sales, followed by wholesale and retailing (15 percent), manufacturing (12 percent) and construction (5.3 percent). 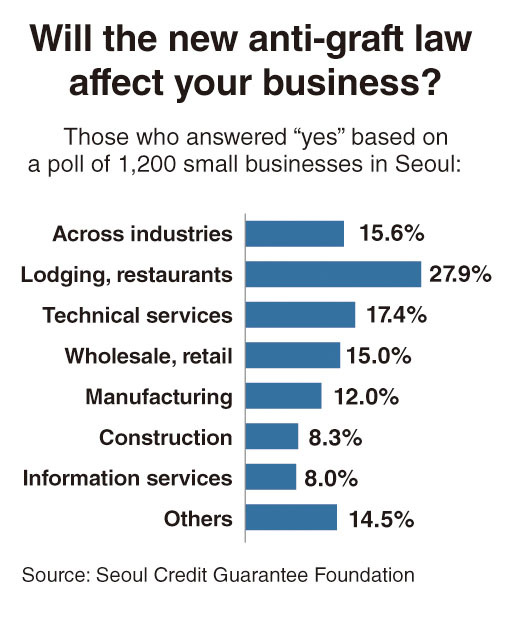 The Improper Solicitation and Graft Act, more frequently referred to as the Kim Young-ran act, restricts government officials, journalists and private school faculty from offering and receiving meals worth over 30,000 won ($27), gifts worth over 50,000 won or any other type of illicit solicitation.

The survey was conducted on 1,200 businesses comprised of 400 small corporations and 800 micro-enterprise owners in the nation’s capital city from Aug. 23 to Sept. 1, before the law took effect on Sept. 28.