According to industry sources and Yonhap News Agency, the firm has hired global consultancy A.T. Kearney for business and management strategies, which would include ways to seize on the opportunities created by the fall of Hanjin. 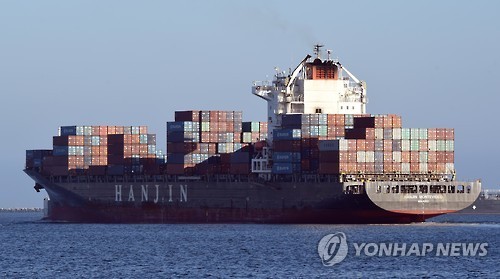 Hanjin, before the crisis, was the world’s seventh-largest container line and handled 40 percent of Samsung Electronics’ home appliance shipments to North America. Its fleet of 97 container ships comprises 37 owned by Hanjin and 60 that are chartered.

YNA reported that HMM is considering taking over some of the chartered ships to build up the Asia-North America routes. Hanjin-owned vessels are less attractive because they are mostly older, it said, citing unnamed sources.

Although HMM is in a creditor-led corporate rehabilitation program, unable to escape from global overcapacity headwinds, getting the money for Hanjin’s assets would not be a major challenge.

The government, following Hanjin’s having entered into court receivership, said it would consider ways to help HMM take over Hanjin’s assets, as container shipping is crucial for the country’s export-reliant economy.

A new chief executive -- former president of the Incheon port authority Yoo Chang-keun -- is to take the helm of HMM on Thursday.

Based on advice from A.T. Kearney and other outside professionals, the firm plans to draw up by mid-November a comprehensive package of measures to enhance its management and bottom line.

Meanwhile, government officials expect the paralysis in Hanjin’s cargo processing to be resolved by the end of next month, with injections of a total of 140 billion won ($127 million). Many of Hanjin’s ships are stranded at sea, unable to dock and offload freight due to a cash shortage.

Finance Minister Yoo Il-ho stressed Friday that no taxpayer money would be spent on Hanjin even if the 140 billion won turns out to be insufficient to ease the cargo crisis.