According to statistics released annually by the Education Ministry in August, the number of students in nationwide preschool, elementary, middle and high schools reached 6.63 million as of April 1, down 2.7 percent from the previous year. 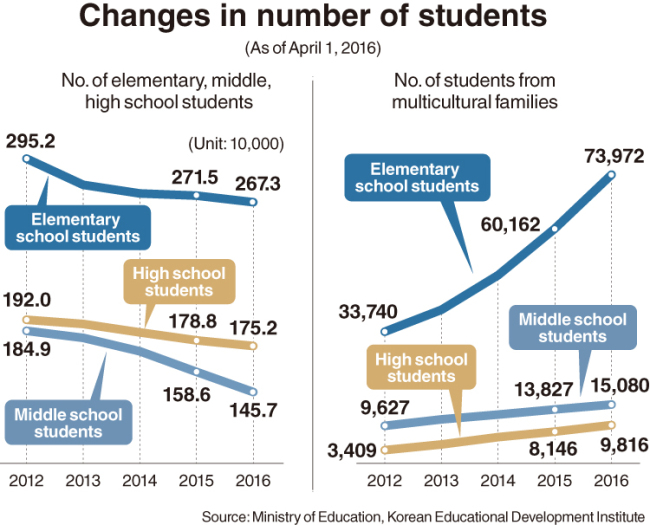 The number of students per class was 22.4 for elementary schools, 27.4 for middle schools and 29.3 for high schools, statistics showed.

Despite the overall fall in students, the number of those from multicultural backgrounds jumped by 20.2 percent from the year before, standing at 99,186 and accounting for 1.7 percent of the total number of students.

Students of Vietnamese descent made up the biggest portion at 24.2 percent, followed by Chinese at 21.3 percent, Japanese at 13 percent, Filipino at 12.6 and ethnic Korean-Chinese at 12.4 percent. Nearly 80 percent of them were born in Korea.

About 3.5 million high school graduates, or 69.8 percent of students, entered universities this year, down 2.7 percent from last year. The university entrance rate has declined gradually from 75.4 percent in 2010.

Nearly 34 percent of high school students in Korea got a job soon after graduation without pursuing higher education.

“Now, there are 120,960 fewer first-year middle school students than first-year high school students. If universities maintain the current admission quota, they will likely have trouble recruiting students,” said an official from the Education Ministry.

The Education Ministry has pushed universities to reduce student admission quotas as part of restructuring efforts amid the falling birthrate.

The fertility rate, the number of babies a woman is expected to have in her lifetime, reached 1.24 this year, showing a 2.8 percent increase from a year earlier. It is still well below the Organization for Economic Cooperation and Development average of 1.68.

The ministry has also offered state funds to universities complying with its recommendation to remove or merge certain majors, create courses in engineering and science and set up career-focused colleges to curb a growing mismatch in the labor market between young people’s career expectations and skills employers look for from job candidates.

The mismatch has been cited as one of the reasons behind the high unemployment rate for young people aged between 15 and 29, which stood at 9.2 percent in July.