The KMA said last week that heat would subside over the weekend and the tropical night phenomena will also diminish.

However, the daytime high hit 36.5 degrees Celsius in Seoul on Monday, while a heat wave warning and advisory were announced for cities across the nation throughout most of last week.

As of Monday, Seoul saw 23 days with a heat wave, the highest number since 29 days were observed in 1994.
Temperatures also remained high throughout the night. It led to sleepless tropical night phenomena which has continued for 19 days in August alone.

The KMA’s wrong weather forecast marks the third error made in August alone on the heat wave. The KMA previously predicted the heat wave will come to an end on Aug. 14, but changed it to Aug. 21.

The KMA announced Monday that daily highs will hit the low 30s starting this Friday and will fall to 29 degrees Celsius by next Tuesday.

Some questioned the KMA’s inexperience in utilizing the super computer, a device used in analyzing weather forecast data. 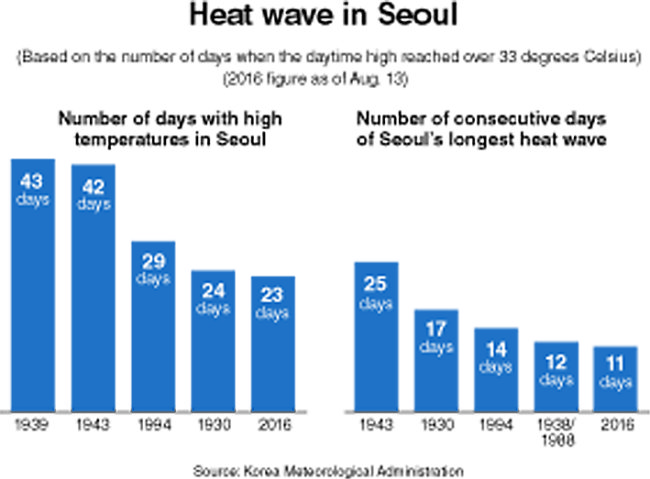 In February, the KMA purchased four super computers at 53 billion won to enhance the accuracy of weather forecasts. Operating the machines costs at least 250 million won a month.

Experts pointed to the lack of an efficient personnel system at the KMA.

“Since the weather data is analyzed by officials at the KMA, it is crucial for them to have years of experience and expert-level knowledge for an accurate forecast result. But the KMA, for instance, does not necessarily consider one’s expertise or experience when naming a person to the Forecast Bureau chief position that is responsible for distributing the forecast,” an official of a local private weather forecast company told the Korea Herald, on condition of anonymity.

Meanwhile, the Korea Centers for Disease Control and Prevention said Monday that a total of 1,994 individuals have been diagnosed with heat-related diseases as of Aug. 20. This is more than 1.7 times higher than the total number of patients treated for the condition last year and 3.2 times higher than the number treated in 2014.

As of Aug. 22, 16 Koreans have died after suffering heat-related causes such as heat stroke -- the highest number since the state compiled data on heat stroke patients in 2011.