To mark its 30th anniversary, the museum is showcasing some 300 pieces from its collection of more than 7,800 works

It is among some 300 works that the National Museum of Modern and Contemporary Art, Korea has culled from its extensive collection to celebrate the Gwacheon Museum’s 30th anniversary.

The somber scene in the video offers a fresh vantage point from which to look at the tragedy of the Cold War. It also ties in with other artworks on display that reflect words that describe Korean modern history marked by the Cold War: urban development, consumerism and migration, among others.

Although curators intended for viewers to discover cohesion among the artworks, it is likely that their flow of thought might be disrupted instead.

The MMCA’s anniversary exhibition “As the Moon Waxes and Wanes” uses many abstract phrases and overblown prose in its description of works, which has the potential to leave viewers confused, irritated and exhausted.

The exhibition pamphlets and the titles of each section contain a lot of scientific and academic terms as well as art jargon that can be confusing to visitors, especially families with young children.

For example, an introduction to the first part of the exhibition reads “The logo of the ‘Interpret’ exhibition includes a coordinate … that refers to the location of ‘Mare Foecunditatis,’ the largest of the flat mare plains of basaltic rock that covers the surface of the Moon. Mare Foecunditatis has a very rough surface, and thus signifies the multifarious ways of interpreting works of art.”

Kang Seung-wan, a curator of the exhibition, said, “The exhibition title was set four to five months ago. We regarded every artwork as a living creature and used the moon as a metaphor to describe the life cycle of our art collection.” 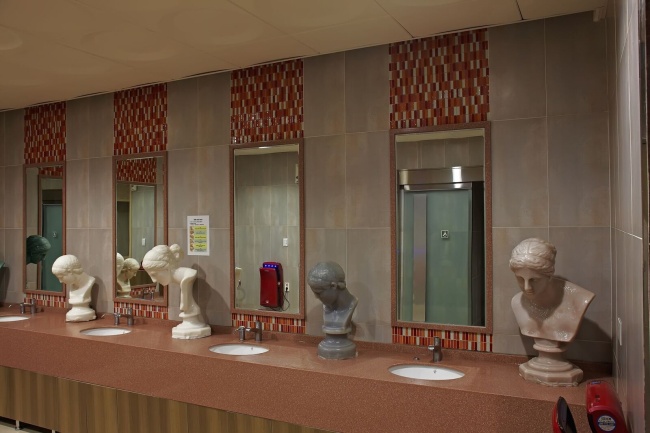 "Toilet Project“ by Shin Mee-kyong places sculpted soaps next to wash basins in restrooms at the MMCA's Gwacheon Museum. Visitors can use the soaps to wash their hands. (MMCA)
The “Interpret” exhibition seems to overflow with academic and abstract interpretations of contemporary art.

For instance, in one of its subsections, viewers are left baffled by its title “Horns, Canine Teeth and Shells” and concept of “performativity.”

The exhibition’s “Re-light” section features artworks that have long been kept in storage or have never been exhibited. Labelled with codes such as “PA,” “SC,” “PH” and “NM” -- each representing painting, sculpture, photograph and new media, respectively -- the artworks offer a glimpse of the museum’s art categorization and identification process.

“This is very much a public-friendly exhibition. It shows both sides of artworks -- from their conception, production and background to (the process of) becoming a museum exhibit,” said Kang.

The museum is also hosting a variety of interesting performances throughout the exhibition period.

Last Thursday, veteran avant-garde artist Kim Ku-lim restaged the naked performance that he first presented 40 years ago at a former MMCA museum building in Seoul. He sat on top of a tree trunk, placed high on a stand covered in a white fabric, and meditated amid the sound of Buddhist bell rings. 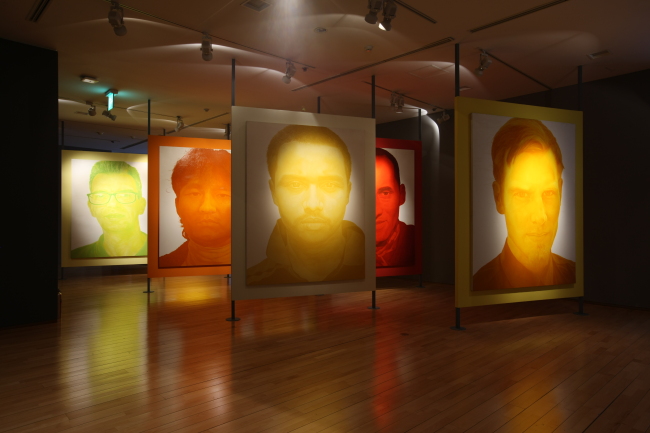 "Portrait Museum - From Body to Face“ by Koh Nak-beom (MMCA)
“At that time, people pointed fingers at me and called me crazy. People now don’t think of it that way at all,” said the 80-year-old artist during the performance.

“It’s like I’m up in the sky sitting on the clouds and I empty my mind and meditate quietly,” he said.

During the exhibition, models will be hired to replace Kim in the restaging of his performance.

From Sept. 22-24 and from Sept. 29 to Oct. 1, actual shamans will offer nonverbal guided tours of the exhibition.

Admission is free. The exhibition runs until Feb. 12, 2017. For more information, visit www.mmca.go.kr.