"Kinky Boots": The mega hit Broadway musical Kinky Boots is making is way back to Seoul once again. Based on the book by Tony-winner Harvey Fierstein and with music and lyrics by Tony, Emmy and Grammy-winner Cyndi Lauper, the musical tells the true story Charlie Price who goes to oddly extreme lengths to save his father’s shoe factory. The local production will star Lee Ji-hoon, Kim Ho-young, Jung Seong-hwa and Kang Jong-seok. “Kinky Boots” will be staged from Sept. 02 to Nov. 13 at the Blue Square in Hannam-dong, Seoul. Ticket prices range from 60,000 won to 140,000 won. For more information, call 1544-1555.

“Nori”: In celebration of the Seoul Performing Arts Company’s 30th anniversary, the company has unveiled its newest, multi-cultural live song and dance theater production, “Nori.” The production follows the four SPAC performers on a journey around the world to learn about new musical cultures and present them to the Korean stage. “Nori” will be staged daily (except on Mondays) at the Arko Arts Theater’s Grand Theater in Daehangno, Seoul until Aug. 21. Ticket prices range from 30,000 won to 70,000 won and can be purchased online at www.spac.or.kr. For more information, call 02-523-0986.

“Peste”: A musical based on the tragic tale of French author Albert Camus’ “The Plague” combined with the sounds of legendary K-pop icon Seo Tai-ji, new local musical “Peste” is hitting the stage this summer. The musical that tells the horrifically graphic tale of the deadly plague that sweeps the Algerian coastal city will star Son Ho-young of g.o.d., Kim Da-hyeon, Park Eun-seok, Kim Do-hyun, Oh So-yeon, Linzy of Fiestar and Jeong-min of Boyfriend. “Peste” will be staged from July 20 to Sept. 30 at the LG Arts Center in Gangnam-gu, Seoul. Ticket prices range from 60,000 won to 140,000 won. For more information, call 1577-3363.

“Bare, The Musical”: The critically-acclaimed Off Broadway production, “Bare, The Musical,” has once again returned to Seoul. The musical follows the story of the secret romantic relationship of two high school students at a Catholic boarding school, Peter and Jason. While Peter wants to make their relationship public, Jason is reluctant for fear of losing his popular social status. The local rendition of the performance stars Jung Won-young, Kim Seung-dae, Seong Du-seop and Suh Kyung-soo. “Bare” will be staged at the Doosan Art Center’s Yongkang Hall in Seoul until Sept. 4. Ticket prices are listed at 66,000 won and 88,000 won. For more information, call 1588-5212.

“Sweeney Todd, The Musical”: The gruesome tale of a man filled with vengeance, the musical tale of the demon barber of Fleet Street is hitting the Seoul stage. Sweeney Todd follows the life of Benjamin Barker, who, after being wrongfully accused of a crime, takes his vengeance on the people of London by murdering the patrons of his barbershop. Starring Ock Joo-hyun, Cho Seung-woo, Yang Jun-mo and Jeon Mi-do, the musical will be staged at the Charlotte Theater in Songpa-gu until Oct. 3. Ticket prices range from 60,000 won to 140,000 won. For more information, call 1588-5212.

“Romeo and Juliet”: Universal Ballet will be presenting Kenneth MacMillan’s “Romeo and Juliet” from Oct. 22-29 at the Seoul Arts Center’s Opera Theater. This is the first time in four years that the group is performing the iconic Shakespeare piece about the tragedy that unfolds between two star-crossed lovers. The performance will begin at 8 p.m. from Tuesday to Friday, at 7 p.m. on Saturday, and at 3 p.m. and 7 p.m. on Sunday. Tickets range from 10,000 won to 120,000 won and are available at sacticket.co.kr or ticket.interpark.com. For inquiries, call (070) 7124-1737.

“The Nutcracker”: The Korean National Ballet will be performing the holiday classic “The Nutcracker” at the Cheonan Arts Center from Dec. 6-7. Originally choreographed by Petipa and Ivanov, the two-act ballet boasts score by the legendary composer Tchaikovsky. Tickets range from 10,000 won to 70,000 won, and are available at ticket.interpark.com or cnac.co.kr. For inquiries, call 1566-0155. 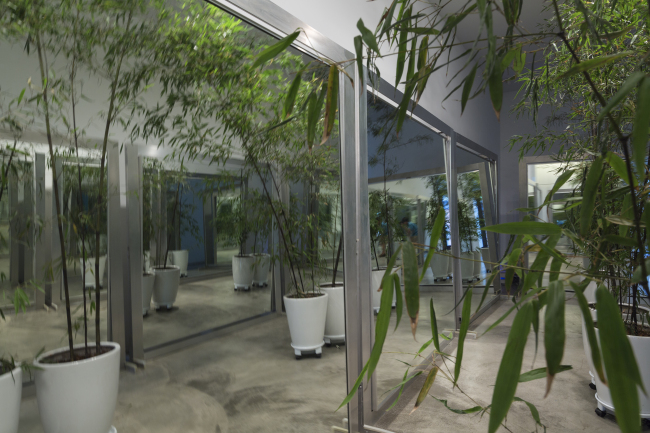 "Unfamiliar Walk" by Lee Yong-baek (Hakgojae Gallery)
“The Unfamiliar Walk”: Artist Lee Young-baek, who became known for his sold-out, imposing 2011 exhibition at the Korean pavilion of the 54th Venice Biennale, is holding a solo exhibition at Hakgojae Gallery with new works. The show features mirror installations and video works that reflect dualities of Korean society and the world seen through social media. This show traverses different genres in art ranging from sculpture and painting to media art, using various types of materials such as mirrors, aluminum sheets, motors and absorbents. The exhibition runs until Sept. 25. For more information, call (02) 720-1524.

“Unforseen”: Art and modern dance meet in a joint experimental performance project between the National Museum of Modern and Contemporary Art, Korea and the National Dance Company of Korea. The performances presented by 13 artists and teams are staged spontaneously at various spots of the museum, or presented in an exhibition format at the museum. The performances will combine unique features of contemporary art and dance traversing diverse fields of arts from visual art, film, poetry and dance media to sound. The performances run from Aug. 17 to Oct. 23 at the MMCA’s Seoul museum at 30 Samcheong-ro, Jongno-gu, Seoul. For more information, visit www.mmca.go.kr.

“Archive of Mind”: The National Museum of Modern and Contemporary Art, Korea is hosting artist Kim Soo-ja’s solo show as part of its annual exhibition program sponsored by Hyundai Motor Company. The exhibition showcases latest works by Kim, including site-specific installations, videos, sculptures and photos that explore the body and the mind. The exhibition runs until Feb. 5 at Gallery 5 and the museum’s courtyard. For more information, visit www.mmca.go.kr.

“Nam June Paik Show”: Large-scale installations by Nam June Paik, including a few rarely seen in previous exhibitions of Paik’s works, are on display at the commemorative exhibition that celebrates the late artist’s 84th birthday. Highlight pieces of the exhibition, which opened on July 20 at Dongdaemun Design Plaza, include large video art installations “Turtle” and “M200,” which consist of many television monitors that each show imposing images created and edited by Paik. The exhibition runs until Oct. 30 at DDP. Tickets range from 5,000 won for children to 15,000 won for adults. For more information, visit www.ddp.or.kr.

“Treasures from Afghanistan”: The National Museum of Korea is holding an exhibition that showcases more than 230 rare Afghan artifacts. The exhibition, started in Paris in 2006, has been hosted by 18 museums in 11 countries around the world, including the National Gallery of Art in Washington, the Metropolitan Museum of Art in New York and British Museum in London. The featured artifacts, dating from the Bronze Age to the third century, offer a comprehensive understanding of the birth of civilization in the center of Eurasia, its ancient culture and foreign influences. “Treasures from Afghanistan” runs until Sept. 4. For more information, visit www.museum.go.kr.

Lee Jung-seob: The National Museum of Modern and Contemporary Art, Korea is presenting a solo exhibition of Korean art master Lee Jung-seob to mark the 100th anniversary of his birth. The exhibition showcases some 200 paintings and 100 pieces of related documents on loan from some 60 museums and collectors, including the Museum of Modern Art in New York. Divided into major periods of his artistic career from the 1930s to 1940s, the exhibition guides viewers through Lee’s tumultuous personal life and the early modern history of Korea. The Lee Jung-seob exhibition runs until Oct. 3 at the MMCA’s Deoksugung Palace museum. For more information, visit www.mmca.go.kr.

“Three Jewels: Buddhist Art of Korea”: Ho-Am Art Museum is holding an exhibition that highlights Korean Buddhist art until Nov. 6. The exhibition presents Buddhist paintings, sculptures and craftworks that portray teachings and the lives of two major subjects of worship in Korean Buddhism -- the Sakyamuni Buddha and Amitabha Buddha. The museum, located near Everland, operates a shuttle bus from the Everland ticket office to the museum every hour from 9 a.m. to 5 p.m. Tickets are priced at 4,000 won for adults and 3,000 for teenagers. For more information, visit www.hoammuseum.org.

Pop Music
“The Cribs”: English garage rock band The Cribs will be performing in Korea at Itaewon’s Hyundai Card Understage on Sept. 13, Tuesday at 8 p.m. The band, originally from Wakefield, West Yorkshire, consists of twins Gary and Ryan Jarman and their younger brother Ross Jarman. The band became active on the concert circuit in 2002 and has since released six studio albums. From 2008 to 2011, guitarist Johnny Marr of English rock band The Smiths joined as a full-time member of the group. The Cribs’ hits include “Men’s Needs,” “Mirror Kissers,” “I’m A Realist” and “We Share the Same Skies.” Its most recent studio album “For All My Sisters” was released in March, 2015. Concert tickets are priced on 88,000 won and can be reserved at ticket.interpark.com.

“Lee Sun Hee -- The Great Concert”: Legendary Korean pop songstress Lee Sun-hee will be holding a concert from Sept. 2-4 at the Sejong Center for the Performing Arts. The concert will take place at 8 p.m. on Friday, at 6 p.m. on Saturday and 5 p.m. on Sunday. Lee, who debuted in 1984 and has since sung hit songs like “To J,” “Fate” and “When the Love Falls,” is heralded as an iconic diva and one of Korea’s most skilled vocalists here. At the age of 51, Lee released her 15th studio album “Serendipity” in 2014. Ticket prices range from 99,000 won to 154,000 won. Tickets can be reserved at ticket.interpark.com. Lee will also be touring major cities in Korea in the upcoming months.

“Arcadia Korea”: Arcadia Spectacular, the performance art collective show that combines architecture, pyrotechnics and music, will be taking place in Seoul on Sept. 2-3. Arcadia Korea will see Seoul’s historic Olympic Stadium transformed into an immersive world of mechanical creatures, flying aliens and giant fireballs. The music headliners will be English drum and bass band Rudimental and Greek-Swedish DJ Steve Angello. Also featured will be the show’s trademark giant “Spider,” weighing 50 tons and forged from ex-military machinery and industrial components. Tickets prices range from 88,000 won to 220,000. They can be reserved at ticket.interpark.com

Nell Comeback Concert "C": Indie rock band Nell will be holding a concert at the Yes 24 Live Hall in Gwangjin-gu, eastern Seoul on Sept. 3-4. The concert marks the band’s seventh full-length album "C," which comes two years and five months after its last release. The theme of the new album includes chaos, conflict, confusion and contradiction. The four-member band, debuted in 2001, consists of vocalist and keyboardist Kim Jong-won, lead guitarist Lee Jae-kyong, bassist Lee Jung-hoon, and drummer Jung Jae-won. It rose to fame through hits like “Stay” and “Time Walking on Memory.” Tickets are priced at 110,000 won and can be reserved at ticket.interpark.com.

“Recomposed -- Daniel Hope & Zurich Chamber Orchestra”: British violinist Daniel Hope and the Zurich Chamber Orchestra will be performing classic pieces by Shostakovich, Bach, Ruegg and others at the Seoul Arts Theater on Oct. 4 at 8 p.m. Accompanied by flutists Paik Soo-hyun and Philipp Jundt and pianist Francois-Xavier Poizat, the concert will conclude with British composer Max Richter’s rendition of Vivaldi’s “The Four Seasons.” Tickets range from 40,000 won to 120,000 won and can be reserved at www.sacticket.co.kr or ticket.interpark.com. For inquiries, call (02) 541-2512.

“Julia Fischer Violin Recital”: Critically-acclaimed German violinist Julia Fischer will be holding a violin recital at the Seoul Arts Center on Oct. 21 at 8 p.m. Accompanied by German pianist Martin Helmchen, the program will consist of pieces by Brahms, Schubert and Dvorak. Tickets range from 50,000 won to 130,000 won and can be reserved at ticket.interpark.com. For inquiries, call (02) 599-5743.