By 김경호
Published : Aug 12, 2016 - 10:48       Updated : Aug 12, 2016 - 10:48
[THE INVESTOR] Government officials were quick to describe the decision by global credit appraiser Standard & Poor’s on Monday to raise Korea’s sovereign credit rating from AA- to a record high of AA as positive recognition of the way they have handled the country’s economy.

In a statement issued the same day, the Ministry of Strategy and Finance said the decision was highly surprising, given the rating agency has been downgrading sovereign debt ratings of major economies lately. 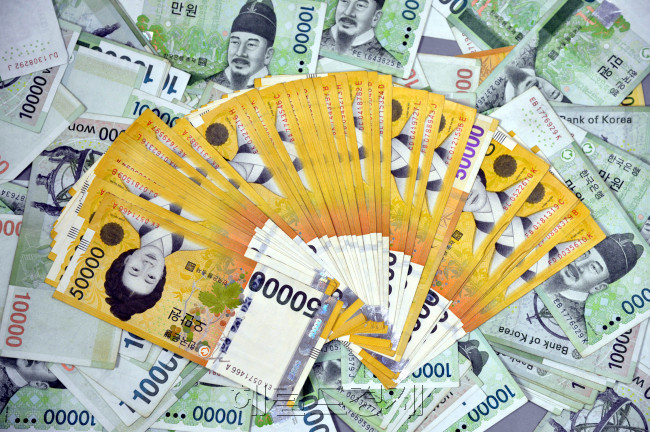 President Park Geun-hye also mentioned it Tuesday when she attended the national convention of the ruling Saenuri Party, saying the upgrade was the “outcome of ceaseless efforts we have made to revive the economy.”

Park and her economic aides might feel flattered by the statement of the rating agency that the upgrade reflects its assessment that Korea’s strong record of steady growth has generated a prosperous economy, greater fiscal and monetary flexibility as well as continual improvements in external metrics.

But economists here caution against being complacent, saying it would go too far to view the upgraded rate as a tribute to the performance of the economy as a whole.

Sovereign credit rating largely reflects the ability of a country to repay its external debt. An upgrade in the indicator may help reduce the cost of offshore borrowing, but it can hardly be seen as ensuring that an economy will fare better in the coming period, critics say.

“As the country’s industrial competitiveness is declining with some troubled sectors set to undergo corporate restructuring, there is no guarantee that an improved credit rating will lead to a brighter future of our economy,” said Kwon Oh-in, an official handling economic issues at the Citizens’ Coalition for Economic Justice, a leading nongovernmental organization in the country.

Last December, Moody’s gave Korea a rating of Aa2, a level equivalent to S&P’s AA. Fitch, the other global rating agency, has maintained an AA- grade for the country from September 2012 onward.

Economists note conditions cited by S&P as backing up its upgrading of Korea’s credit rating may become worse.

It may be increasingly difficult to keep external soundness and fiscal and monetary flexibility if exports continue to decline and rising national debt remains unaddressed, they say.

The country’s outbound shipments tumbled for the 19th consecutive month in July, with its record streak of current account surplus attributed to a steeper decline in imports.

Over the cited period, the ratio of state debt to gross domestic product is forecast to rise from 37.9 percent to 39.3 percent, still lower than corresponding figures for other major advanced economies. But the debt increase is poised to accelerate further in the coming years to help finance expanded welfare programs and prop up growth.

Local economists seem to barely take note of the argument that Korea’s economic growth in the 2-3 percent range is superior to those in other major economies.

They indicate Korea’s growth momentum has weakened too early, given other advanced economies grew by 4-5 percent when their per capita GDP remained at the $20,000 level.

Combined with other factors, the latest upgrading of Korea’s sovereign rating has worked to push up the value of the won by helping increase the inflow of foreign capital into local equity and bond markets. The won closed at a 14-month high of 1,095.4 won against the dollar on the local currency market Wednesday.

This rapid appreciation of the won may further weigh down the country’s exports that have been struggling with lowering oil prices, decreasing demand worldwide and rising global protectionism.

“As credit rating can be subject to readjustment at any time, policymakers should avoid staying complacent and put policy focus on preparing for downside risks down the road,” said Kim Jung-sik, an economics professor at Yonsei University in Seoul.

Economists say Korea’s credit rating at its record high level would make little difference for its economy without drastic efforts toward deregulation, industrial restructuring and diversification of export markets.