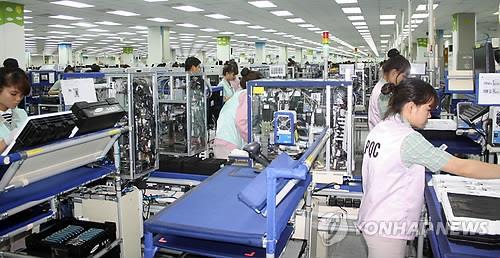 Last week, the provincial government of Ha Nam gave the green light to Seoul Semiconductor to build the 750,000-square-meter production site that will house a semiconductor factory and a light-emitting diode assembly line, they said.

Under an investment plan released by the Seoul-based firm, a total of $300 million will be injected into building the site by 2019 to conduct research and produce semiconductors, the sources said.

"Vietnam was chosen because it will help us meet the global demand for LEDs and secure a competitiveness in production costs," a Seoul Semiconductor official said.

Industry sources forecast that the firm's move is to provide components to other South Korean tech firms, which already have made inroads into the Southeast Asian country.

According to the sources, South Korean tech giant Samsung Electronics Co. produces between 40 and 50 percent of its smartphones at its two factories located in Bac Ninh province, northern Vietnam, and Thai Nguyen.

Samsung also plans to relocate parts of its TV production lines in Malaysia and kimchi refrigerator lines in South Korea's Gwangju to this complex.

Samsung Electronics will expand its investment size there from $1.4 billion to $2 billion by 2020, the sources said.

In return, the city government of Ho Chi Minh decided last week to give further tax benefits to the tech giant, they said.

Seoul-based LED manufacturer Lumens Co. will begin operating its factory in September located in the southern province of Binh Duong which is currently under construction.

Lumens currently produces LEDs that are used for various products ranging from televisions to smartphones. The company also works with Samsung Electronics.

LG Electronics Inc., South Korea's No. 2 tech giant, also opened a new production base in Haiphong, a northern port city of the country, that will manufacture the company's key products for exports.

The 800,000-square-meter Vietnam Haiphong Campus will allow LG to produce price-competitive electronics, including its globally sold smartphones and TVs, the company said. It plans to spend US$1.5 billion on the complex through 2028.

Vietnam stands out as an attractive investment destination as a monthly minimum wage is about 59 percent that of China.

Also, the Southeast Asian country has a population of over 90 million and 60 percent are in their 30s or younger.

"Vietnam has a very good investment condition as labor cost is very cheap and 54 million is a labor population," said Park Byung-book, chief of the Korea Trade-Investment Promotion Agency's branch office in Hanoi. "Tech firms are increasingly making inroads into Vietnam, which used to be favored by textile or sewing firms in the past."