Lee Chang-suk, 50, appeared before the Seoul Central District Prosecutors' Office as a suspect as another business executive claimed that he did not get his stake of the ball club that Lee had promised in return for 2 billion won (US$1.7 million). 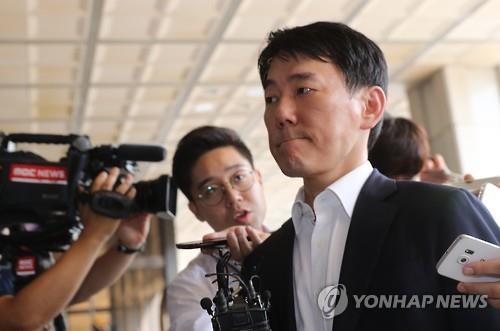 "I will fully cooperate with the prosecution's investigation," he told reporters before entering the prosecutors' office. He declined to comment on the allegations raised against him.

In December 2012, the Korean Commercial Arbitration Board ordered the Heroes to give Hong Sung-eun, chairman of the Atlanta-based real estate developer Rainier Group, his 40 percent stake.

Last month, a Seoul court also ordered the Heroes to hand over some of its stake to Hong.

The summons came a few weeks after the prosecution raided the home and the office of Lee. He has been placed under a travel ban since June 20.

Prosecutors said they will also grill Lee over allegations of embezzlement and professional negligence.

The Heroes joined the Korea Baseball Organization before the 2008 season, replacing the cash-strapped Hyundai Unicorns. The Heroes have also experienced financial trouble during their tenure.

The KBO said if Lee's allegations turn out to be true, he can be removed from the organization's board. Lee, who is also chief executive officer of the Heroes, is one of 12 directors on the KBO board.

"Since no legal decision has been made, we just have to wait," said Yang Hae-young, secretary general of the KBO. "If his allegations turn out to be true, Lee can be removed from the KBO board under the organization's rule." (Yonhap)