Morgan Stanley, the lead manager for the sale, has closed the preliminary bidding for the fifth largest life insurance firm in Korea, and will carry out the bidding for what is said to be the largest M&A deal in the first half of this year. 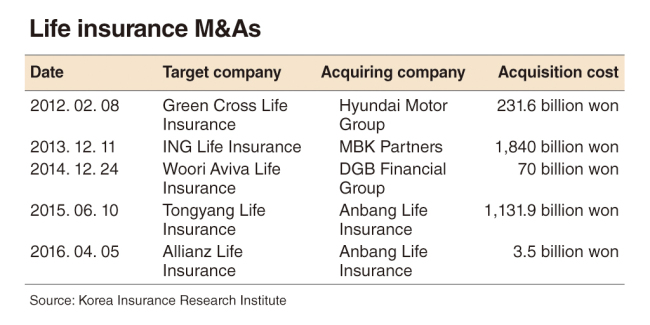 One of the three Chinese companies, Hong Kong-based investment manager JD Capital, Taiping Insurance Group and Fosun International, will be selected as the preferred bidder, as the other few Chinese firms including China Life and Anbang Insurance as well as South Korea’s third largest insurance company Korean Kyobo Life have decided to drop out after the preliminary bidding which closed in May.

If ING Life, with an estimated asset of 30 trillion won (US$26.38 billion), is acquired by a Chinese firm, Chinese capital will own about one-tenth of the nation’s insurance industry as Anbang has already taken over Tongyang and Allianz in 2015 and 2016, respectively.

MBK has acquired the entire stake of ING Life in late 2013 for 1.84 trillion won and expects to sell it for approximately 3 trillion won. Considering the slowing market and introduction of the second phase of the IFRS4 standard that requires enlarging the capital base for life insurance firms, however, some industry sources said it is unlikely to meet the expected price.