The number of new home permits issued came to 79,912 in June, compared with 73,102 in the same month last year, according to the data from the Ministry of Land, Infrastructure and Transport. 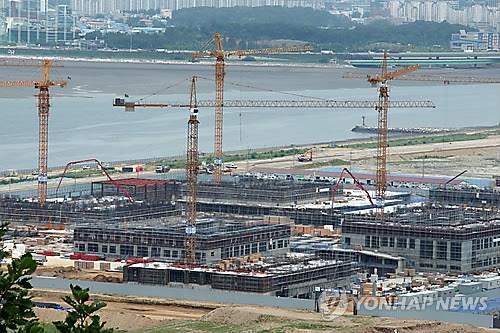 The June tally marks a turnaround from a 7.3 percent decline in the previous month, the first on-year drop in 17 months.

The increase, however, came only from a rise in permits issued in rural areas.

Home permits issued in rural areas spiked 35.8 percent on-year to 42,376 in June, while those issued in Seoul were nearly halved from 9,916 a year earlier to 5,066, according to the ministry.

Home permits issued in Seoul and its surrounding areas, including the western port city of Incheon, plunged 10.4 percent to 37,536.

The number of groundbreakings, on the other hand, slipped 5.9 percent on-year to 61,743 in June, possibly indicating a slowdown in the real estate market that has enjoyed a boom, partly created by a series of government measures, including eased regulations on home mortgages.

The government began tightening loan regulations after household debt hit a record high of 1,223.7 trillion won ($1,077.2 billion) at the end of March.

For the first six months of the year, home construction permits spiked 18.4 percent on-year to 355,309, the ministry said.

Home permits in the Seoul metropolitan area gained 2.2 percent to 164,111 in the January-June period, while home construction permits in rural areas jumped 37 percent to 191,198.