A Korean baseball pitcher has been indicted on charges of engaging in match-fixing schemes.

Prosecutors in Changwon, South Gyeongsang Province, some 400 kilometers southeast of Seoul, said Thursday that Lee Tae-yang, pitcher for the NC Dinos in the Korea Baseball Organization, has been indicted without physical detention for allegedly fixing games. Another baseball player, outfielder Moon Woo-ram, has also come under investigation for similar charges, but his case has been handed over to the military prosecution since he is on active duty. 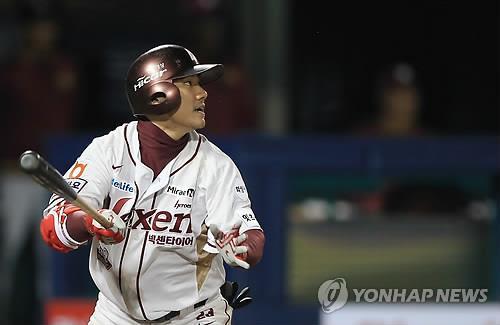 Moon is under contract with the Nexen Heroes in the KBO but is currently doing his mandatory military service with Sangmu in the Futures League, the KBO's equivalent of the minors.

In addition, Changwon prosecutors have indicted a gambling broker and an operator of an illegal sports betting house in connection with the scandal.

Lee was allegedly asked to give up a run in the first inning on May 29 against the Kia Tigers, and later received 20 million won ($17,540) from the broker when he succeeded.

Lee took the loss in that game after allowing four earned runs in four innings.

The gambling house operator made 100 million won by placing a bet on that game -- 20 million won of it went to the broker and Moon received a watch and luxury clothes worth 10 million won, according to prosecutors.

Then for the July 31 start, Lee was asked to give up enough runs so that both the Dinos and his opponents, the Heroes, would have at least six runs on the board through four innings. Though the Heroes won the game 7-4, the score was only 1-0 for the Heroes after four innings.

For games on Aug. 6 and Sept. 15, Lee was asked to issue a walk in the first inning.

Prosecutors said Lee successfully walked a batter in the August game, but failed to do so in September. Lee didn't appear to have received any money for these three games, according to prosecutors.

He was the losing pitcher on July 31, then got a no-decision on Aug.6. He won on Sept. 15 in his best start of the season -- two earned runs over eight innings with nine strikeouts against the KT Wiz.

Prosecutors said the broker asked Lee to throw pitches outside the zone in the first inning because it is easier to conceal fixing schemes and pretend to not be properly warmed up.

Prosecutors added that Moon approached Lee and the broker first with his own set of fixing schemes, and they met about a week before their targeted game to discuss their strategies.

The broker and the gambling house operator appeared to have made proposition bets, or "prop" bets. They place odds on seemingly minor plays, such as the number of walks issued in a certain inning, or the number of free throws made in a quarter in a basketball game. There's often no cap on the amount of wager for such bets, and it's considered easier for gamblers to fix such minute plays.

The only legal form of sports betting in Korea is through buying Sports Toto lottery tickets. Sports Toto offers odds on wins, ties, losses and the combined scores between teams. A bettor can only wager 100,000 won per ticket.

Lee and Moon joined the Heroes together in 2011 -- Lee as a second-round draft pick and Moon as a walk-on. Lee made his KBO debut in 2011 and joined the Dinos in an expansion draft before their inaugural season in 2013. Moon played his first KBO game in 2012.

Lee won a career-high 10 games last year and has gone 2-2 with a 4.21 ERA in 10 appearances this season. The Dinos took him off their active roster on June 28, citing elbow pain, but admitted on Wednesday they made the move to cooperate with the prosecutors' investigation.

Lim Seuk-pil, attorney for Lee, told Yonhap News that the player has admitted to his charges and is "devastated" that he has let down his fans.

"I think his judgment might have been clouded by his young age," Lim said. "He was just trying to play baseball and didn't necessarily have emotional maturity. He might have been tempted by the broker."

The Dinos issued an apology Wednesday and said they've asked the KBO to authorize the termination of Lee's contract and to place him on the "disqualified" list.

Once a player is on that list, he is banned from playing in the KBO and also in the United States, Japan and Taiwan, under the terms of the KBO's agreements with professional leagues there.

The Heroes also issued an apology, saying they're prepared to mete out the toughest form of punishment on Moon and also to accept a penalty themselves for their lack of oversight.

The Heroes said, however, Moon is claiming innocence, and they will thus wait for the court's decision before settling on a punishment for the player.

"We will actively cooperate with the authorities should there be further requests for investigation," the club said.

"Transparency must be at the basis of sports and accomplishing illegal objectives through improper methods must never be tolerated."

The KBO is about four years removed from its first match-fixing scandal. Park Hyun-joon and Kim Sung-hyun, then pitchers for the LG Twins, received suspended jail terms and fines for their roles in fixing, and the KBO slapped them with lifetime bans.

Later Thursday, the KBO issued an apology for misconduct by its players. Aside from the players in the match-fixing scandal, the Samsung Lions pitcher An Ji-man is under investigation for allegedly helping a friend open an illegal gambling website.

An faced police questioning for illegal overseas gambling charges earlier this year, and police have recommended an indictment against the pitcher.

The Lions subsequently asked the KBO to authorize the termination of An's contract.

"We're extremely sorry for causing such a huge disappointment to our baseball fans," the statement read. "We will set up stern measures to prevent a recurrence of similar cases, and establish a cooperative network with the government and other professional sports federations to eradicate illegal sports gambling."

Later Thursday, the KBO temporarily suspended Lee, Moon and An.

They are banned from joining team practices and other baseball-related activities, and they will not be paid for the duration of their suspension. It said it will take additional steps as necessary, depending on court decisions. (Yonhap)